Yippee for the Js! Orcas spotted near San Juan Island 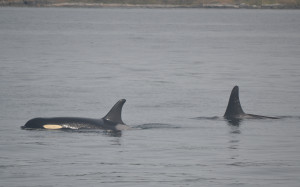 Yesterday was one of those magical trips that we have spent all winter dreaming about. Captain Mike and I left Friday Harbor with a lively private charter group on the search for some wildlife! As it is still early season for seeing killer whales, I was cautiously optimistic on our chances of seeing whales, but thought if we did see orcas that they would most likely be some of our local Bigg’s killer whales who’s diet consist of our plentiful marine mammals in the area. We were treated to many bald eagle fly-bys as we proceeded north towards Canadian waters.

We cruised through Boundary Pass, the northern body of water that separates the US and Canada, and got a call from our sightings network: Whales! And lots of them, close by! We motored north and encountered members of J Pod, some of our Resident ecotype killer whales. These animals are salmon eaters, foraging mostly on the king salmon that run through our waters up to their spawning rivers May-September. I was so happy to identify (ID) some of my very favorite individuals… the J17s as well as the J22s. We can ID whales by looking at their pre-exisiting markings on their backs, called the saddle patch, and dorsal fins. Each of these is as unique to the individual whale as our fingerprints are to us.

We started the encounter by watching J46 Star foraging. We got some awesome looks at that beautiful girl off the bow, and then off the stern her mother J28 Polaris (born 1993) popped up with her newest calf J54 (born in December 2015). This was my second encounter with this little one after a brief encounter on December 1st of last year, and, my, how that baby has grown! J28 Polaris has obviously been doing a great job, that calf is looking round and is oh so active! The next grouping we happened upon were the J22s, lead by matriarch J22 Oreo. J22 Oreo travels with her two sons J34 Doublestuf and J38 Cookie, and yesterday they were babysitting J47 Notch, 6-year-old son of J35 Talequah. It is not unusual to see those associations between families and to see females helping to raise other females’ calves. We then watched J17 Princess Angeline and her two youngest calves, J44 Moby (born 2009) and J53 born in October of 2015. All of the whales looked to be in great condition and we were even treated to some breaching behavior. It was so good to see those whales again!

To top off the trip we spent some time watching some Steller’s sea lions frolicking in the waters around Spieden Island. We had such an awesome trip!