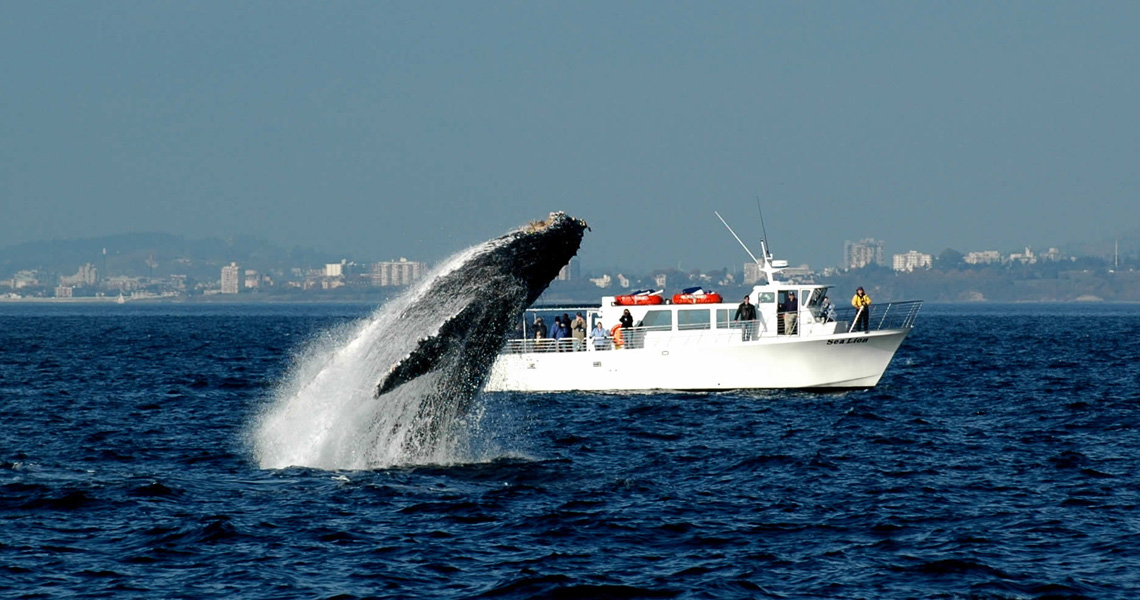 It’s baleen whale mania in the Salish Sea right now! The mid-summer feeding frenzy is in full swing and baleen whales of all sizes are taking full advantage of it. Gray whales, minke whales, fin whales, and humpback whales have all been spotted in the area already this summer, making every day an exciting new addition of wildlife lottery.

Today we left the dock with a very promising report of humpback whales traveling south through San Juan Channel. We caught up with them just as they were entering cattle pass and followed them as they traveled purposefully south, fluking out after almost every surfacing and diving for short periods of time. For a few surfacings they even trumpeted – a social behavior that involves vocalizing through their blowholes in a kind of whistle. I’ve only observed this a handful of times, so it was amazing to witness in these two whales.

We followed them as they entered the Strait of Juan de Fuca, and were just about to turn back for home when SPLASH!! One of the humpbacks did a full body breach just a few hundred feet from our starboard side! Breaching in adult humpbacks is rare to begin with, but a full body breach, where everything but the tip of their fluke is out of the water, is almost unheard of. We were awestruck and completely surprised, so we stuck around for a few more surfacings, including some more trumpeting and some half-lobtails and almost-tailslaps. These whales were socializing a lot, especially for summering humpbacks. After another beautiful fluke out dive, we pointed our bow back for Friday Harbor, stopping to view some tufted puffins and harbor seals on our trip back.