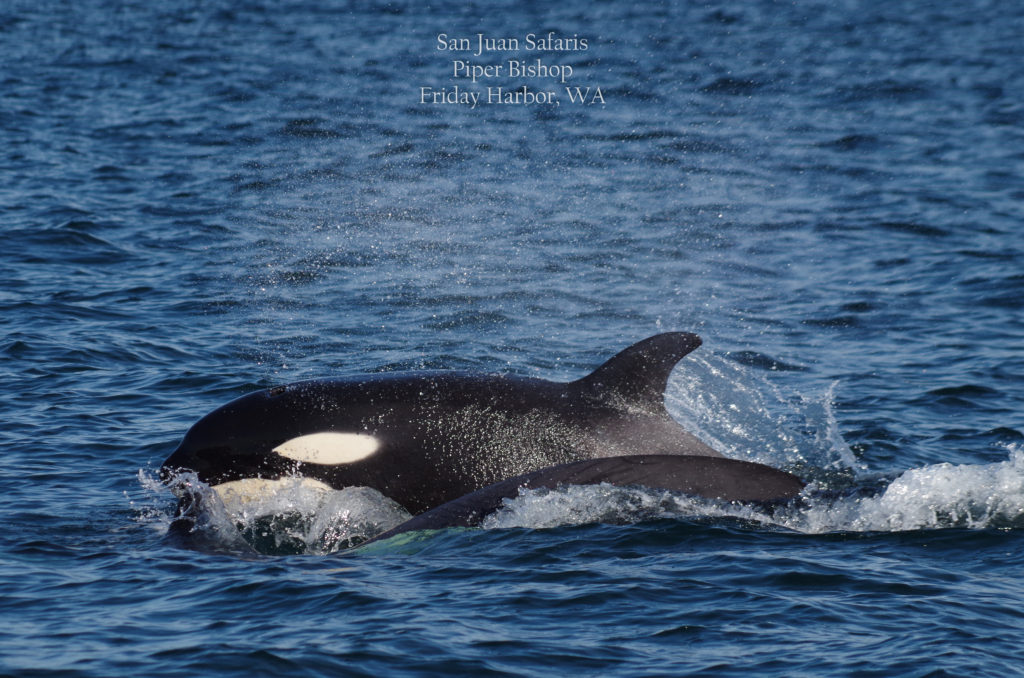 This Thursday, Captain Gabe and I took a charter group out on the M/V Kittiwake to have a great time as a family and look for the local marine wildlife. We headed north through San Juan Channel and turned up Boundary Pass and made it around East Point which is on Saturna Island. We scooted by the rocks at East Point and looked at the Harbor Seals hauled out there. These blubbery pinnipeds are very common throughout the Salish Sea area. As we looked at them looking back at us we talked about how these creatures are incredible divers and also the main food source for the Transient/Bigg’s Orcas in the area. We soon moved on in between Saturna and Tumbo Islands. Right in the shining reflection off the water we saw two blows! As we approached we saw it was two orcas hunting near Tumbo Island. It was the T124A2’s! This is a mom and her calf who normally travel with the mom’s mom T124A and the rest of the family. As we and the two orcas moved north through the channel we saw more blows up ahead! It was the rest of the T124A’s! We watched them all swim and socialize and for a while they took to hunting around all the tiny sandstone islets that make up the Belle Chain along the Saturna Island. It was amazing to see them cruise and cut through the waves as the sunset behind them. We eventually left them and headed back through Georgensen Pass, which is a skinny pass through the Canadian Gulf Islands. As the sandstone cliffs rise topped with fir trees it looks like a river. We pass through and make our way home watching Bald Eagles and Harbor Porpoises as the sun set in orange and pinks behind us.

Another exciting day of whale watching out here!