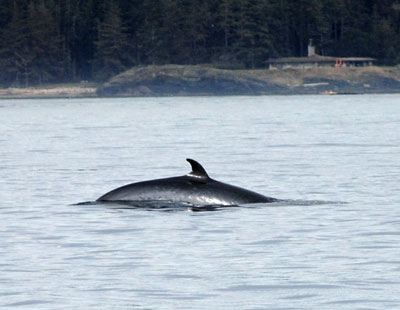 We meandered south this afternoon toward Salmon Bank, where there was a report of a minke whale. On the way there, we stopped to check out some incredibly active harbor porpoise. These little guys are described as “boat shy,” and often won’t surface again for a long time if a boat stops near or approaches them. This group of three, however, must have been foraging, and was very present and energetic at the surface.

As we continued south, we caught a glimpse of a few more harbor porpoise, as well as some adorable harbor seals drifting in the currents of cattle pass. Just as we rounded cattle point, we noticed what may have been the largest, most rambunctious bait ball of my time. A bait ball is basically just a giant school of small fish that are schooling near the surface. Usually, they are given away by a large flock of birds sitting on water, eating the fish.

This is also a good place to look for other predators, such as harbor seals, harbor porpoise, and minke whales, as all of them are eating the same prey as the birds are. We waited here with our eyes glued to the water hoping for a minke whale to surface. To no avail, we continued a bit farther out toward Hein Bank, where we also tend to see a lot of minkes. Our guests were the first ones to see it! They pointed, we followed.

Right away, we got amazing looks at this 25 foot whale–with its rostrum breaking the surface every time!

We spent close to 45 minutes with this whale, and even found another close by, before heading toward home to check out the giant Stellar sea lions hauled out on whale rocks.