Yesterday was great! We had slightly grey skies and a lovely group on the M/V Sea Lion. Mike and I were determined to find some killer whales in amongst the beautiful San Juan Islands.

Working with the Pacific Whale Watch Association spotting network we got a rumor of whales hanging around the south end of Lopez Island near Iceberg Point. People always ask if we have people spotting whales from aircrafts, and on a normal day I would say no. Our spotting network is usually either land based or on vessels in the water. Yeasterday was not a normal day! A company friend was flying on a Kenmore Air seaplane flight and texted that he spotted some whales. Though there were no boats on scene, it seemed like our best bet on seeing the large black and white cetaceans so we went for it!

After stopping to observe some seals and sea lions through San Juan Channel we meandered our way out into Haro Strait scanning for whales. We worked our way through several coves on Lopez Island, as other boats also searched the area. Nothing. We started motoring further around Lopez when the call came from boats moving south through Rosario Strait, they had contact with a group of killer whales. Captain Mike excitedly swung the boat around and we headed north.

We arrived on scene with the orcas and quickly realized that we were looking at Transient, marine-mammal eating, killer whales on a kill. The bird activity above the whales was out of this world as all of the gulls scrambled for scraps of the meal the whales were devouring. The whales lazily rolled around socializing as they ate, and engaged in a number of foodsharing behaviors. Most notably we got to witness some moonwalking, or whales surfacing in reverse, which is thought to be related to social foodsharing behavior. We also got to witness several spyhops as the whales lifted their enormous heads out of the water to have a look around.

Perhaps the most exciting moment of our encounter what watching two juveniles, play with a kill at the surface. They seemed to relish the moment, stretching what seemed to be seal intestines out like kelp between their tail flukes and bringing the carcass up to the surface. We also had the opportunity to test the M/V Sea Lion’s recently upgraded speaker system when we dropped our hydrophone (underwater microphone) into the water to eavesdrop on the whales’ conversation. It always gives me goosebumps to hear them chatting! 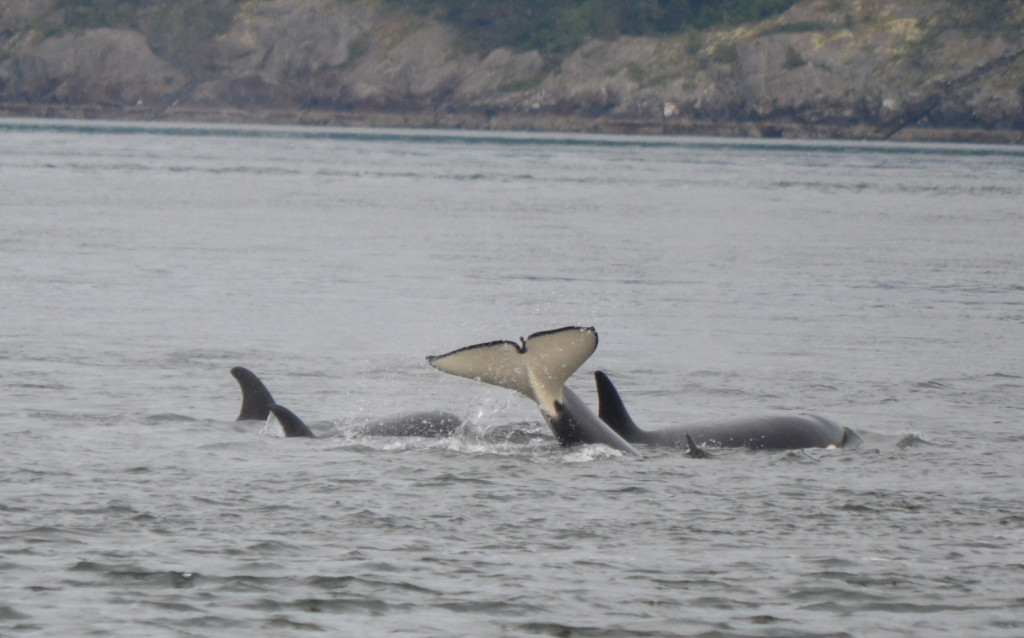