For our afternoon trip on Saturday we took a little bit of a different route on the M/V Kestrel than we did in the morning. We started out by going south again to view one of my favorite animals and yours – the Steller Sea Lions! They were a little sleepier now than they were this morning. Most of them were taking hard-core naps on the exposed volcanic rocks. There were a few larger males that couldn’t decide who deserved one spot on the rock more than the others. We watched them and their much smaller cousins the Harbor Seals also sharing the rocks for a while and as we rounded the rock we saw the large flock of Pelagic Cormorants drying their wings next to the sea lions. These adorable little diving birds can dive deeper than 100 feet using only the power of their webbed feet. Which is amazing! Most diving birds propel themselves using their wings like penguins do. After appreciating the life on this rock for a while we head north along the southern and western shores of San Juan Island.

As we finished passing San Juan Island we headed towards the outer island of Stuart Island. Around the northern most point on the island called Turn Point we met a family of Transient (Bigg’s) Orcas. It was the T100’s! This is a beautiful orca family. The Transients are the ones that feed on marine mammals. This family has six members. There are two adult females, an almost fully grown adult male, and three younger ones. They were zig-zagging through Boundary Pass most likely in a search of prey like seals or sea lions swimming and not paying attention them in the middle of the pass. While they do have strategies to remove prey resting on rocks they usually like to find prey unawares in the water. They are a lot easier to catch that way. 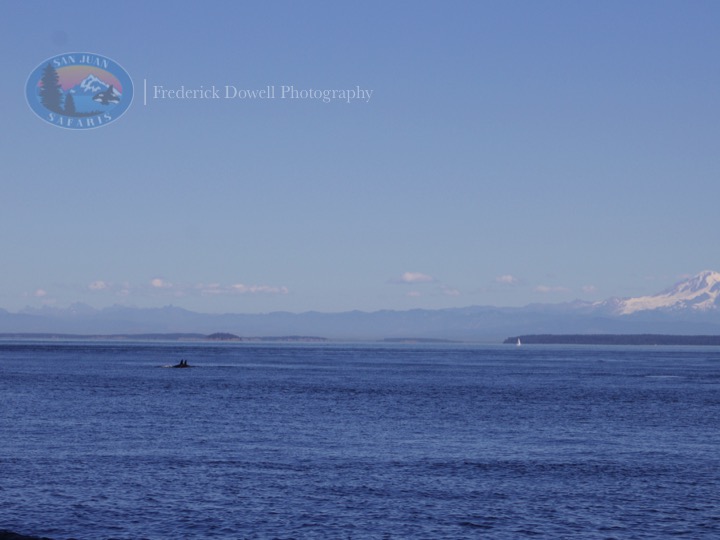 We left this family and went just a little bit south to White Rock near Waldron Island. Here there was another family of Transient Orcas hunting around the seal covered rocks here. It was the T65A’s! This family looks remarkably like the T100’s in family dynamics, but there are enough differences to tell them apart. We watched this one hunt and slowly travel northward towards where we left the T100’s earlier. Maybe they’ll meet up. Whale folks, until next time!