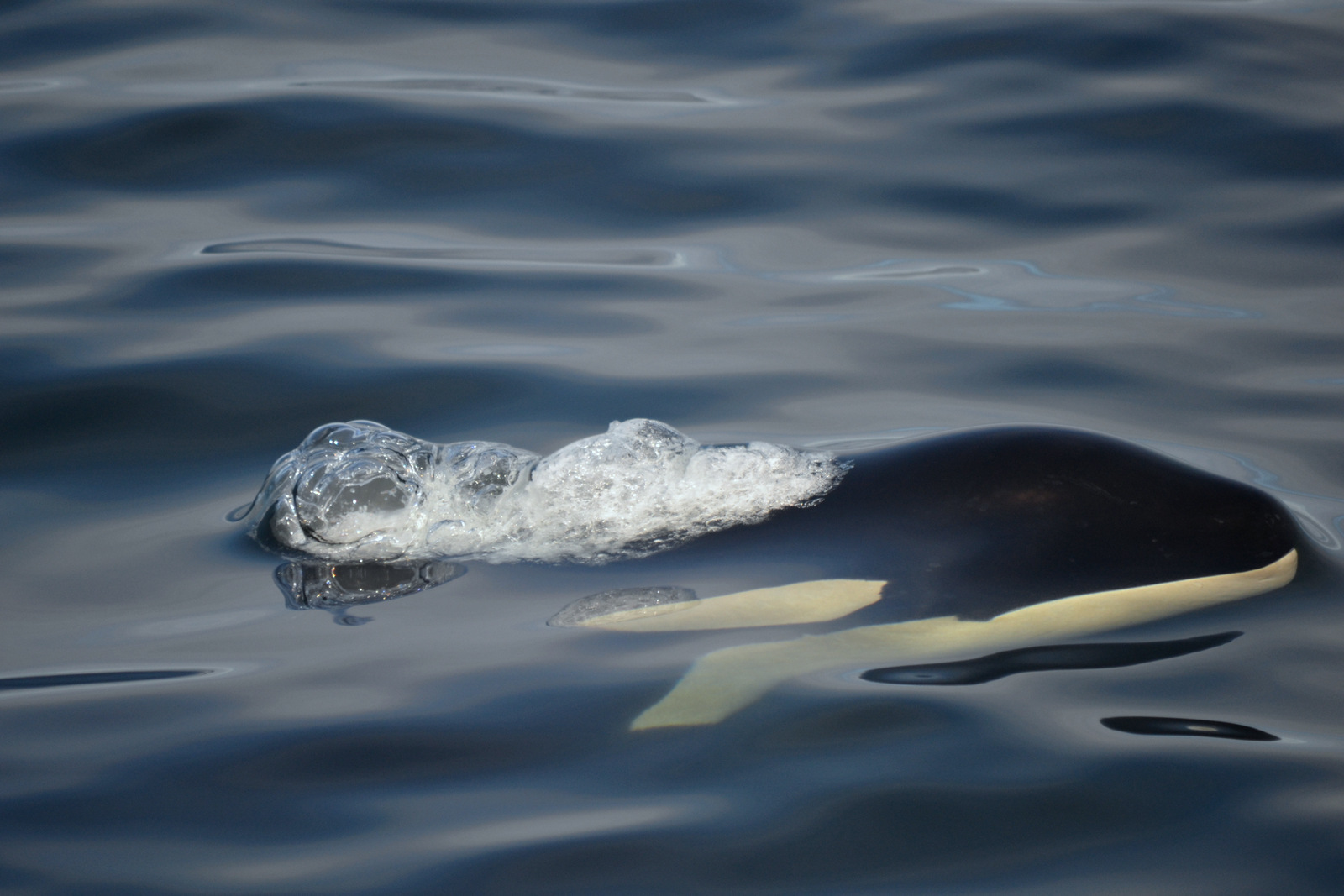 We left the dock with no good report of orcas. Thirty minutes off the dock, Captain Mike pulled me into the wheelhouse to pass along the news: Orcas, and lots of them North in Canada! I excitedly passed the news along to guests as we cruised under sunny San Juan skies watching gulls and harbor porpoise flit past us.

We headed North around East Point on Saturna Island and stopped to observe some Steller’s sea lions hauled out on the rocks near the island, and we marveled at the size difference between the huge sea lions and the relatively small harbor seals also hauled out on the rocks. The Steller’s sea lions can reach 12 feet in length and well over 2,000 pounds, while the harbor seals are usually only about 5-6 feet long and weigh 250 pounds.

We continued north towards our reported whales, and we kept getting more information: there were two groups, all together probably more than 30 individuals! That was impressive, but even more so was the fact that there were two ecotypes of orca being reported in the same area. Orcas are what we call a “cosmopolitan species” meaning that they are found in all the world’s oceans. Most people do not realize, however, that there are actually 10 different recognized types of killer whale found the world over called “ecotypes”. These ecotypes are both genetically and behaviorally isolated populations, meaning that they do not interbreed and that they have totally different behavior profiles from one another. The Salish Sea ecosystem is considered to be the best place in the world to see wild killer whales because we have two of these ecotypes that can be spotted in our waters on a regular basis, called Residents and Transients. The main difference between the ecotypes is in their diets. Residents are exclusively salmon eaters, with Chinook salmon making up roughly 80% of their diets. Transients, on the other hand, are marine mammal eaters, focusing mostly on harbor seals and harbor porpoise in this area.

It is very rare to have both ecotypes reported in one day, even more rare to be able to see both ecotypes in the space of one trip! Guests aboard were treated to one of the most incredible orca days I have had in three years of working out here on the water. We encountered roughly 25 Transient killer whales and also had the opportunity to encountered a portion of our Southern Resident population getting awesome looks at J28 Polaris and her two kiddos J46 Star and her youngest J54. It was a truly spectacular day out on the water.