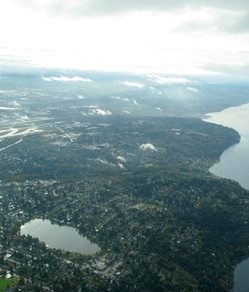 Seattle, which is in the Puget Sound, lies on a narrow strip of land between the salt water of the sound and the fresh waters of Lake Washington.

There are two mountain ranges: the Olympics Mountains to the west and the Cascade Mountains to the east. Seattle is built on hills and around water, in a mild marine climate with about 25 inches of rain per year.In 1851 white settlers came to the Seattle area. Town sites were established, which they first called New York. Later the Chinook jargon meaning “by-and-by” Alki, was added for the new name; New York-Alki. The inhabitants then moved a short distance across Elliott Bay or what is not known as Pioneer Square district. A protected deep-water harbor was available there.

This village was soon named Seattle, honoring a Duwamish Indian leader named Sealth who had befriended the settlers. The San Juan Islands have a state ferry named Sealth in his honor also.

A brief Indian “war” in the winter of 1856 interrupted Seattle’s development, but when the Territorial legislature incorporated Seattle in 1869, there were more than 2,000 residents.The 1870s were fairly quiet, despite the discovery of coal near Lake Washington. In the early 1870s the Northern Pacific Railway Company announced that its transcontinental railroad western terminus would be at Tacoma,some forty miles south of Seattle.
Despite local leaders’ disappointment, Seattle managed to force a connection with Northern Pacific shortly after its completion in 1883, and the town of Seattle’s population soared in the late 1880s.

Lumber and coal were the primary industries for the Seattle area, but the growth of fishing, wholesale trade, shipbuilding, and shipping also contributed to the town’s economic expansion and population growth. One estimate is that in the first half of 1889, Seattle was gaining 1,000 new residents per month

The 1890s were not so prosperous, despite the arrival of another transcontinental railroad, the Great Northern, in 1893. A nationwide business depression did not spare Seattle, but the 1897 discovery of gold along and near the Klondike River in Canada’s Yukon Territory and in Alaska once again made Seattle an instant boom town.

Seattle exploited its nearness to the Klondike and its already established shipping lines to become the premier outfitting point for prospectors. The link became so strong that Alaska was long considered to be the personal property of Seattle and Seattleites.
Seattle’s population became increasingly diversified. Scandinavians came to work in fishing and lumbering, blacks to work as railroad porters and waiters, and Japanese to operate truck gardens and hotels. There were significant communities of Italians, Chinese, Jews, and Filipinos. The International District, home to several Asian ethnic groups, was largely developed during this period.

When the population reached nearly 240,000, Seattle announced its achievements by sponsoring an international fair in 1909. The Alaska-Yukon-Pacific Exposition celebrated the economic and cultural links Seattle had forged along what is now known as the North Pacific Rim. The forty-two story L.C. Smith building 506 2nd Avenue Seattle, WA 98104-2328) was completed in 1914. For more than four decades it was the tallest building in the American west and a symbol of Seattle’s booster spirit and metropolitan aspirations.

The Depression of the 1930s hit Seattle particularly hard. The shipyard was abandoned by 1000 workers. World War II sparked an economic rebound as shipyards flourished again.

When the Boeing company started in 1916, it successfully introduced the 707 commercial jet airliner in the late 1950s. In 1962 Seattle sponsored a full-fledged world’s fair, the futuristic Century 21 Exposition. The fair left the city a permanent legacy in the Seattle Center and its complex of performance, sports, and entertainment halls, as well as the Pacific Science Center, the Monorail, and the Space Needle. A visitor would certainly not wish to miss seeing any of these.