J Pod Orcas Play on the West Side

This Thursday, Captain Gabe and I took a charter group out for someone’s 45th birthday! We took this family on an adventure to go look for some whales and other great wildlife in the Salish Sea! We started north through San Juan Channel and made our first stop at Sentinel Island. Here we saw a pair of adult Bald Eagles sitting in a giant fir tree. It was amazing to see this pair watch us back as we scooted around the island. Next, we made the small jump over to Sentinel Rocks to watch the large group of Harbor Seals that were lying on the rocks. These little rock sausages live their lives here in the Salish Sea and are easy to find almost anywhere in the waters here. 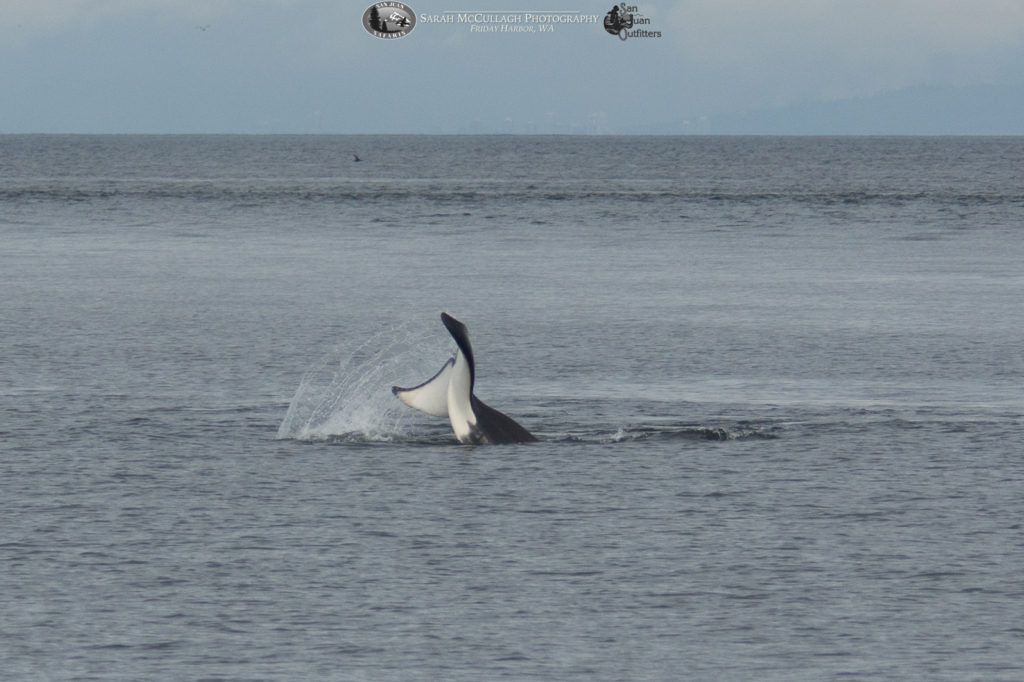 We soon headed out from them and went south in Haro Strait. We passed by Lime Kiln Lighthouse and kept going south until we arrived around Pile Point. Here we started to see some blows in the distance and as we got closer we saw that they were orcas!

After watching them for a little while we could see that this was part of J pod. J pod is one of the pods that makes up the Southern Resident Community of Killer Whales. This is one of types of orcas that spend a lot of time in the Salish Sea. The other ecotype is called the Bigg’s Orcas. These two ecotypes, although they inhabit similar areas do not interact or interbreed with each other any more and one of their biggest difference is that the Southern Resident Orcas eat only fish and the Bigg’s Orcas eat only marine mammals. It has been awhile since we’ve seen the Southern Residents since their preferred food, Chinook Salmon, is very low, but they have been around for the past few days. The group we ended up with was the J16’s. This is one of the few families that together make up J pod. They were very spread out and all seemed to be fishing, but sometimes were definitely active! The J16’s are a great family to watch because they have a few adult females, some younger ones, and an adult male! We watched the younger ones play with their moms for a while. They tail-slapped a few times and were flipping over and getting pushed by their moms too. We then went over to the large adult male, J26, aka Mike, to watch him for a while. He was going on some long dives and then would come to the surface and swim on his side and back for awhile. At the very end of our time with him he flipped his tail fin up while he was upside down and slapped the water a few times. So cool! We had to head out after that but we did make one more stop at Whale Rocks to see all the Steller Sea lions that were still hanging out there! These guys weigh over a ton and a few body-slammed into the water as we watched. What a amazing day out here! It is always spectacular when we get to see orcas, but it’s extra special when we get to see the Southern Resident Orcas who are critically endangered.

Until next time, folks!