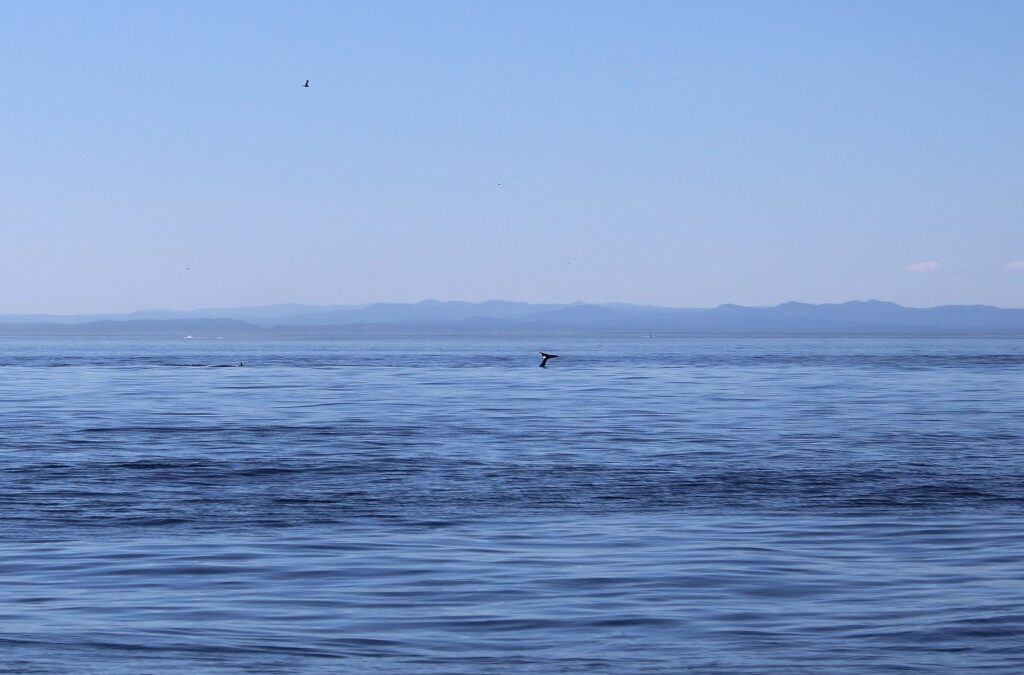 As animals we all have to eat. From the tiniest insect to the biggest whale we all eat something to get energy. Sometimes that something is a little bigger and harder to catch. Transient Orcas are one of the two ecotypes that regularly travel through the waters of the Salish Sea here. They are also the ones that prey upon other marine mammals such as seals, sea lions, and other whales. Yesterday (Thursday) we traveled south on the Kestrel all the way to Dungeness Spit off of the Olympic Peninsula to see not one but two families of Transient Orcas hunting and feasting together. The two families were the T65A’s and the T37s. These are some of my most favorite Transient Matrilines and these two in particular often travel together. The T65A’s are easier to identify with a young sprouter male with a very floppy dorsal fin and a young calf with an odd bend in its tiny dorsal fin.

But on to the good stuff. As we approached these two orca families they were in the process of a hunt. They had trapped something in the shallows near the sandy spit. We soon saw lots of splashing and one head butted a dead Harbor Porpoise a little out of the water. Dinner is served! They spent a few minutes splashing and rolling around as they worked together to take the best parts off (the blubber and the meat) and share it with both families. After they made quick work of that they slowly hunted another prey item, welcome to Murdertown, USA! We are unsure what it was since it all happened under water but their behavior and all the gulls flying around and waiting for left overs gave us enough reason to believe that the killing spree was not over. They quickly dispatched that one and divvied another prey up and started getting down. After eating is usually when the party starts for orcas. They get into a celebratory mood and these were rolling around each other, showing a lot of tail, a few of the young ones breach, and at one point all the older juveniles started pushing the younger ones backwards so we had orcas nose to nose. But this was for a specific reason. As the young ones got babysat the adults in the two families started getting frisky. Part of celebrating sometimes does include mating. WOAH! What a cool and slightly R rated trip! We soon had to leave to cross the Strait of Juan de Fuca and return home! But what a day, it was amazing to see so much diversified behavior in one day.

(disclaimer: Orcas aren’t killing machines, they are super good predators, but are not dangerous to humans nor mindless killing machines in general, they are actualy super intelligent sensitive creatures. I just say things like ‘killing spree’ and ‘murdertown, USA’ to invoke better imagery and because I have a sick sense of humor, apologies for any misconceptions or nightmares)