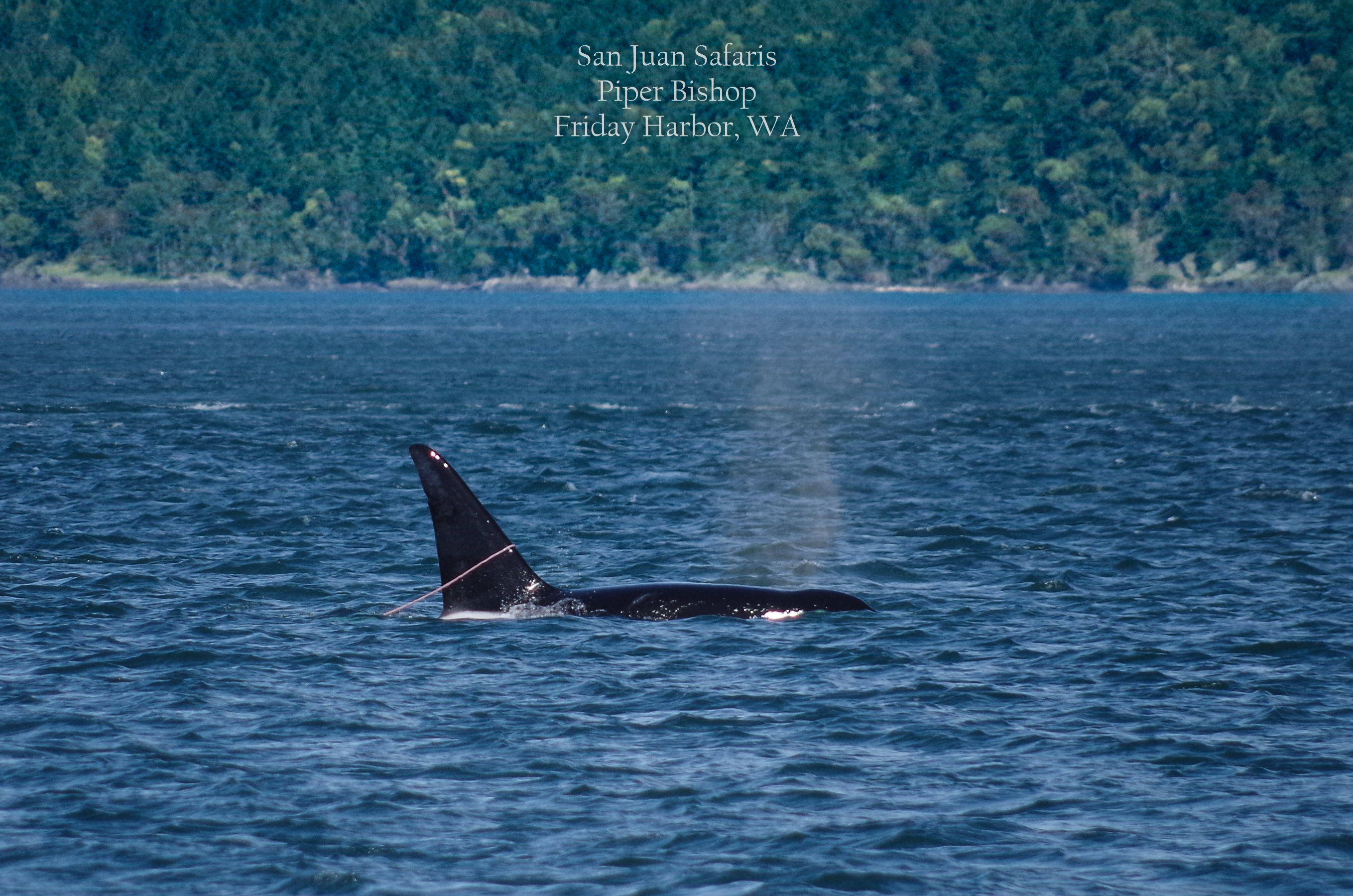 The M/V Sea Lion left the dock today with no reports of whales in the area.  Such a prognosis can place the captain and naturalist in a state of fret, as we know how much our guests want to see whales.  With the pressure on, we scanned the horizon for blows and dorsal fins and requested that our guests also join in an active search.  We covered our neighborhood, including San Juan Channel, as well as Flattop, Spieden, Cactus, and Johns Islands, before motoring out into Boundary Pass and over to the Canadian Gulf Islands.

Halfway into the trip Captain Mike received a call from a fellow captain who discovered a humpback whale fishing the waters south of Saturna Island.  As we approached the scene we spotted a geyser of salt spray, the exhale of a 40-foot-long adult.  Mike sidled up to the scene and shut down the boat.  As we drifted silently with the wind and current, BCY0324, a resident humpback better known as “Big Mama”, rose to the surface just behind our boat!  The details visible with a prolonged, close encounter stunned our friends.  One notable observation were the large knobs present on Big Mama’s head.  For the most part, cetaceans have traded their mammalian hair for a more practical thermoregulation material:  blubber.  Humpbacks, however, have retained a few hairs as environmental sensors.  Each knob is an enlarged hair follicle that surrounds a stout whisker.

Pronouncing our whale watching trip a success, we cruised toward Friday Harbor while soaking in the vibrant colors reflected by the San Juan Islands on a sunny day.  Suddenly we found ourselves making a U-turn and I bounded up to the wheelhouse to satisfy my curiosity.  Captain Mike had received another call indicating that a group of killer whales had been spotted just a few miles away.  Before we knew it, we were feasting our eyes on the T123’s.  This small family of transient killer whales were on the move toward the sea lion-infested rocks of Spieden Island, and we were in the middle.  An oblivious California sea lion barked noisily as the pod approached, and whereas the orcas had been traveling near the surface for the last 15 minutes, they abruptly disappeared on a deep dive.  After a few minutes of anticipation, one guest spotted the animals a distance from our boat accompanied by a boil of red water.  The stealthy pack had dispatched a lion in record timing, as far as I’m concerned.  We watched in fascination as they consumed their catch.  At one point, I was excited to see that the mature male of the pod had found a piece of kelp to play with, but upon closer examination, the bull had draped the intestines of their victim across his dorsal fin!