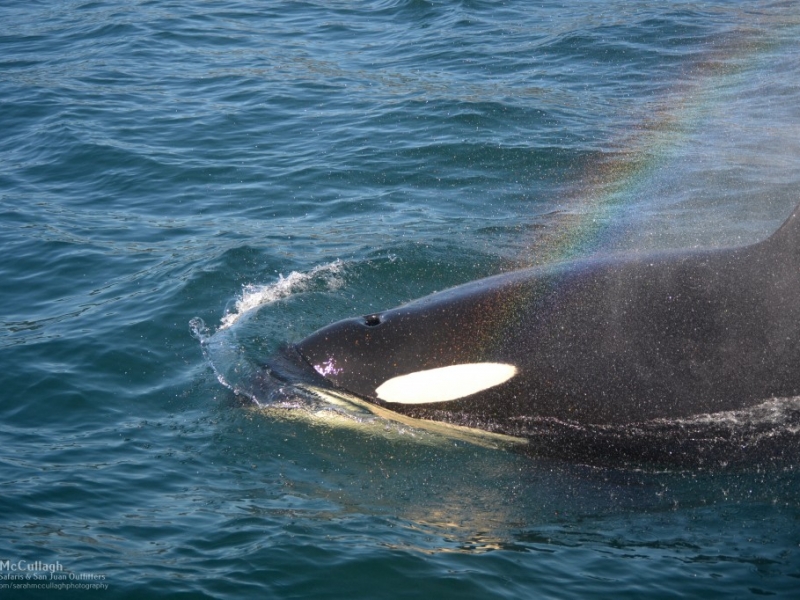 Last night we were greeted with a happy confirmation from the Center from Whale Research, that our core staff here at San Juan Safaris had been hoping for since a staff jaunt out to San Juan Channel on December 1st…. A NEW CALF FOR J28 POLARIS!!

On December 1, with a report of whales right outside of the harbor, we quickly left the office and our post-season projects, jumped into the car, made our way down to the M/V Sea Lion, cut the lines, and were off! A group of J Pod whales including J27 Blackberry, J22 Oreo, J34 Doublestuf, J38 Cookie and the entirety of the J17 matriline led by matriarch J17 Princess Angeline and her new calf J53 were traveling north up San Juan Channel past the Wasp Islands and Jones Island State Park. The whales were breaching, spyhopping and were generally very active, but tucked between the breachy adults and juveniles peeked a teeny tiny fin next to J28 Polaris. As we watched, the adult female pushed her baby up to the surface and guided the little whale through the swell. Polaris’s older daughter J46 Star swirled around her mother and the new baby.

On the day of our foray, there was some question as to whether the calf in J28’s slipstream was a new calf, or if she was babysitting her mother’s, J17’s, new calf J53. Given the evidence of a still attached umbilical cord and the deep orange coloration of the skin of the calf we observed next to J28 Polaris, we felt very strongly that this might be a new calf. We called the Center for Whale Research from the water to see if they could launch their research vessel, but with waning December light and building seas, they could not send their research vessel. After sharing our observations with the Center, all we could do was wait for a time they could get out on the water to observe the 22 year-old potential second-time mom for themselves.

Yesterday was a beautiful day here in the San Juans: sun shining, very little wind, and orcas reported up and down the west side of San Juan Island as if it were a sparkling July afternoon. Fortunately, J-Pod was present and the CFWR was able to catch up with J28, taking photos of the little orange calf still tucked right against her side. This two-and-a-half week old calf is the eighth born to this critically endangered population of killer whales within the last year. J28 Polaris joins the crew of new moms in the community: J16 Slick and her daughter J50 Scarlet, J41 Eclipse and her son J51 Nova, J36 and her son J52 Sonic, J17 and her new calf born in October, L94 Calypso and her son L121 Windsong, L91 Muncher and her son L122, and L103 Lapis and her new calf identified two weeks ago L123.