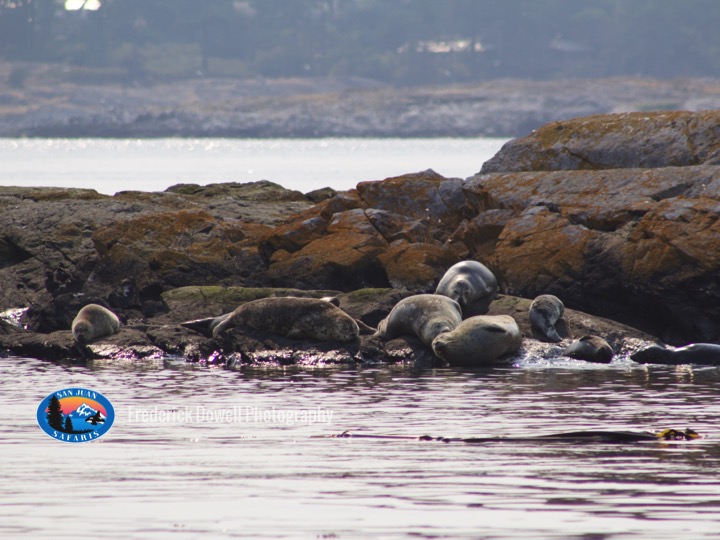 On Thursday, Captain Mike and left on another hazy afternoon adventure with a boat full of great folks on the M/V Kestrel. The past few days have been our warmest this summer and there are also a few wildfires on the mainland in British Columbia and Washington, so a general haze has dropped over the Salish Sea. It has definitely gotten a lot better since the first day, but you can still see the haze a little.

But that wasn’t going to stop us from searching for some cool wildlife!

As we left Friday Harbor we went south towards Cattle Pass. We first stopped at Whale Rocks and saw a bunch of Harbor Seals and Steller Sea Lions. Now the seals are adorable year round residents, but the Steller Sea Lions are usually gone all summer and don’t come back this early, but some of them had. There are now quite a few adult sized males (sometimes weighing over a ton) and a few juveniles and adult females lounging on the rocks and swimming in the kelp beds.

After that we scooted over to Long Island just south of Lopez and saw a few adult Bald Eagles, one yearling, and their enormous nest haphazardly built in a Douglas Fir. Their nests can get quite large since they reuse them ever year and also add sticks to it every year as well. These eagles were all perched on the north side of the island and looking down trying to spot food without putting too much effort in and also not getting a lot of sunlight in their eyes.

After our Bald Eagle sightings we headed north along the west coast of San Juan Island in Haro Strait, and we soon saw blows off of False Bay! It was some orcas (Killer whales)! And not just any orcas, these were some Southern Resident Orcas from L pod! Although orcas live all over the world, there are different types (i.e. ecotypes) that are distinct populations, and the difference that is most easy to tell between these ecotypes are their diet. Of the two ecotypes that we encounter in the Salish Sea, the Southern Residents eat fish, mainly Chinook Salmon, and the other type, the Transients (Bigg’s), eat marine mammals. 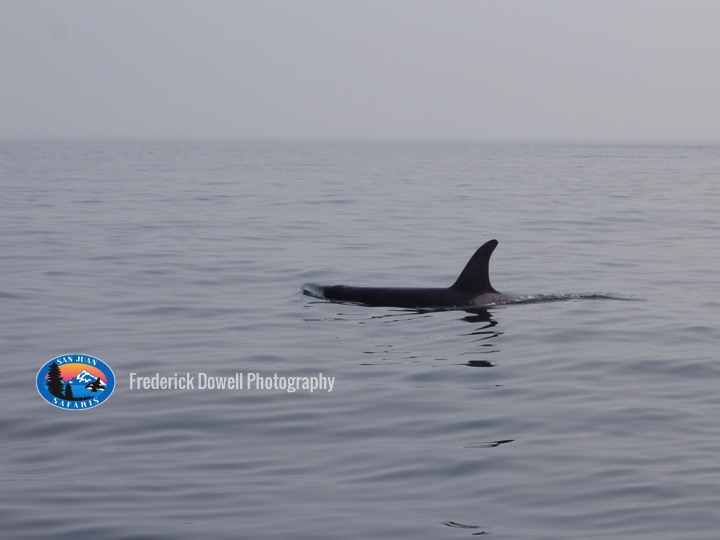 The Souther Residents have only entered the inland waters a rare few times this summer most likely due to a historically low salmon run, so we all hope they are finding plenty of salmon elsewhere, but it’s great to see them while they are here. The first family group of L pod that we encountered was the L47 matriline. This one consists of L47, the matriarch, her three children, L83, L91, and L115, and two grandchildren, L110, and L122. We watched these orcas for a while as they dove for fish and the young ones socialized with their families with pectoral slaps and tail slaps, and a few breaches! 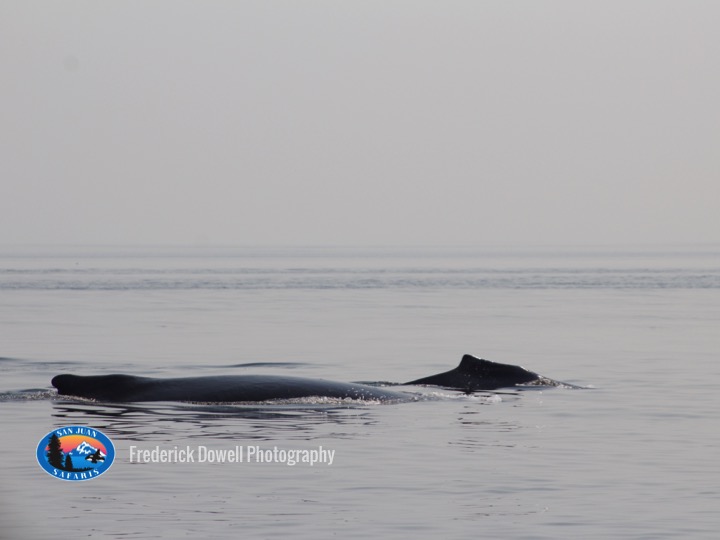 We then took a break from the orcas and went a little further north towards Lime Kiln Lighthouse to see some Humpback Whales! What a treat! Two large whale species in one day! This group of Humpback Whales was a little bit unusual for this area, not because they were Humpback Whales, but because they were three adult ones traveling very close together. They seemed to have grouped up closer after passing L pod the first time. They were very displeased with the orcas and showed that through loud trumpeting. That’s when they emit loud sounds through their blowholes. They had nothing to fear from these orcas since they were fish eating orcas and even if they were Transients I doubt that they would try to go after three full-grown humpback whales. We watched these there beautiful Humpback Whales swim by and fluke up a few times showing us their massive flukes almost the same length as the boat that we were on.

Next we headed back to L pod. We were watching the L47s again and got to see L122 jump out of the water a few times before we moved over to another family, the L72’s, which are L72, Racer, and her son L105, Fluke. Fluke (L105) is a sprouting male, which means he is kind of going through puberty. This happens in their teenage years and lasts until they are around 20 years old. They grow a lot and this is when they start to look different than the adult females as all their fins drastically increase in size. Fluke’s mother, Racer has one of the coolest saddle-patches out of all of L pod in my opinion. So it was great to see here too and the strong mother-son bound that develops in orcas.

Whale folks, it’s about that time again; we soon had to head back after another amazing day. We hope that the Southern Residents keep finding salmon wherever they go and we also hope this smoky haze lifts as well!