From Gray Whales to Dall’s Porpoise to Killer Whales…Epic Day! 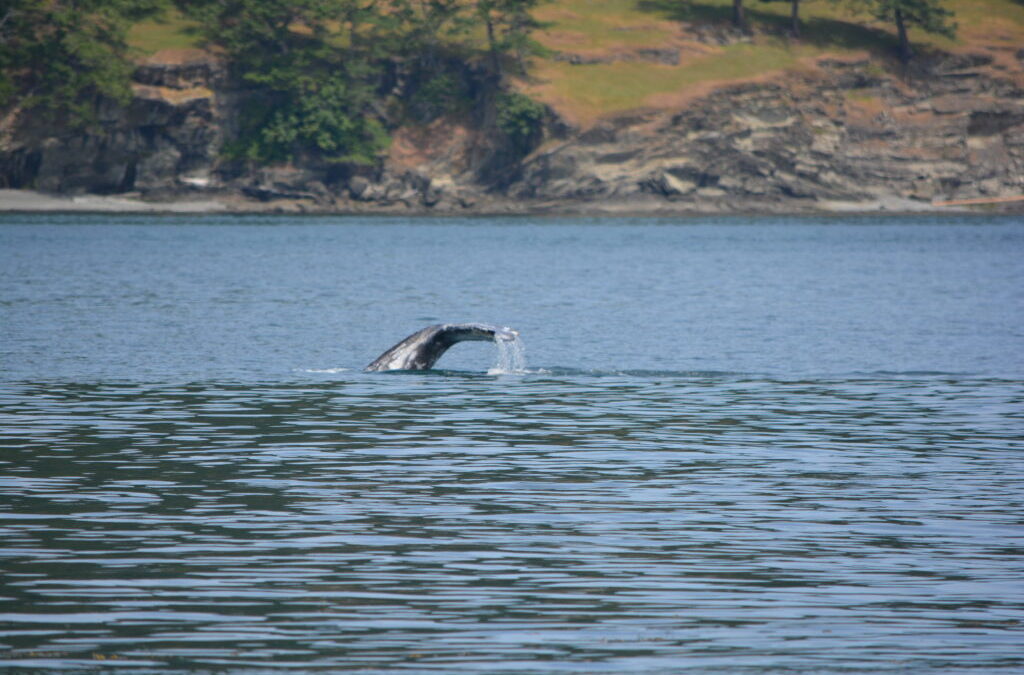 We saw such an amazing assortment of wildlife today! We know that the Salish Sea is an incredibly diverse area, but to be able to see it for yourself is truly a remarkable experience. To kick off the tour on M/V Kestrel, we ventured to the Haro Strait to search for a gray whale that had been reported in the area. Now, this is super exciting. Gray whales, although not completely unheard of out here, are relatively rare – I only saw one last season. You can probably imagine how excited we got when we spotted a mysterious blow just a few hundred yards away from us! Captain Gabe expertly maneuvered the boat so we could get a clear, respectful view of this amazing animal. This particular gray whale was probably around 30-40 feet. Compared to the humpback whales we see around here (which max out around 50 feet), this animal had a relatively small tail fluke. The coloration is also quite different – while humpbacks typically have a dark gray or almost black body, the grays have a very pale mottled gray coloration due to a plethora of parasites and other organisms that make their snouts and backs look like a crusty old rock. I think it adds to their charm!

The amazingness of gray whales doesn’t stop there, either. These animals are bottom feeders, meaning they use their snouts to forage around the sea floor and dislodge tiny creatures. It then uses it’s baleen, just like a humpback’s, to filter these organisms out from the mud. They are also one of the animal kingdom’s greatest migrators, traveling 5-6,000 miles one way to reach warmer waters to birth their young and to mate! 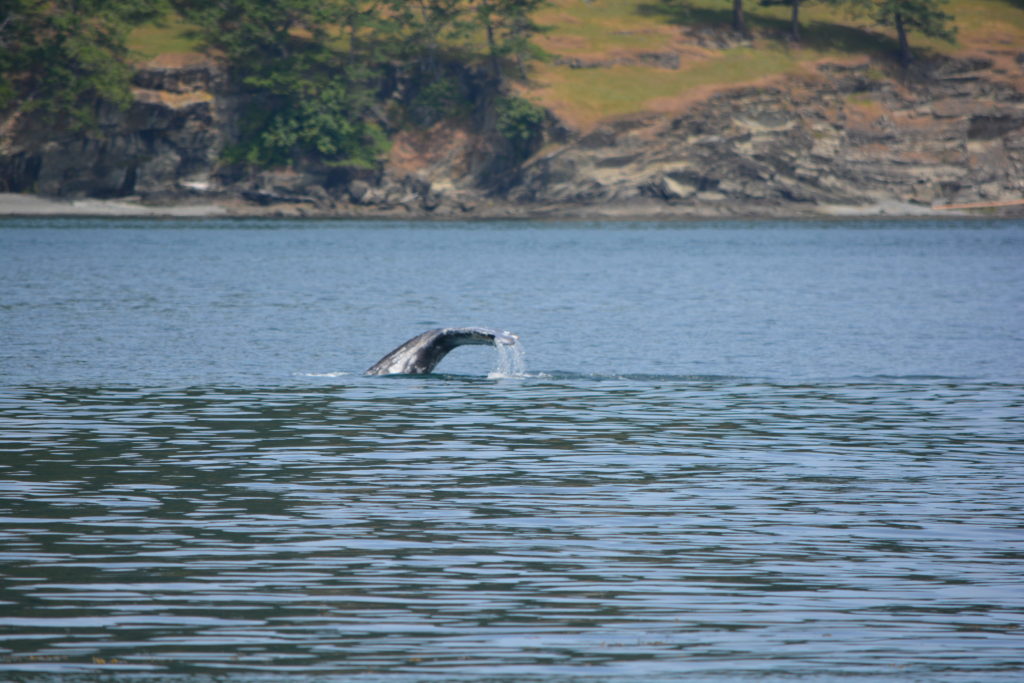 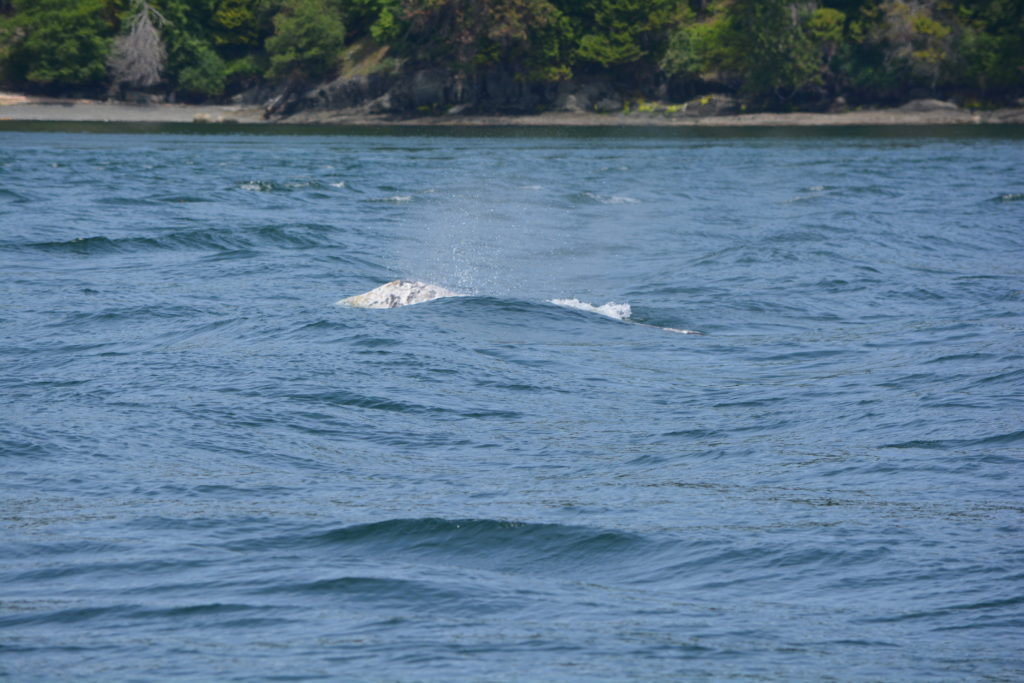 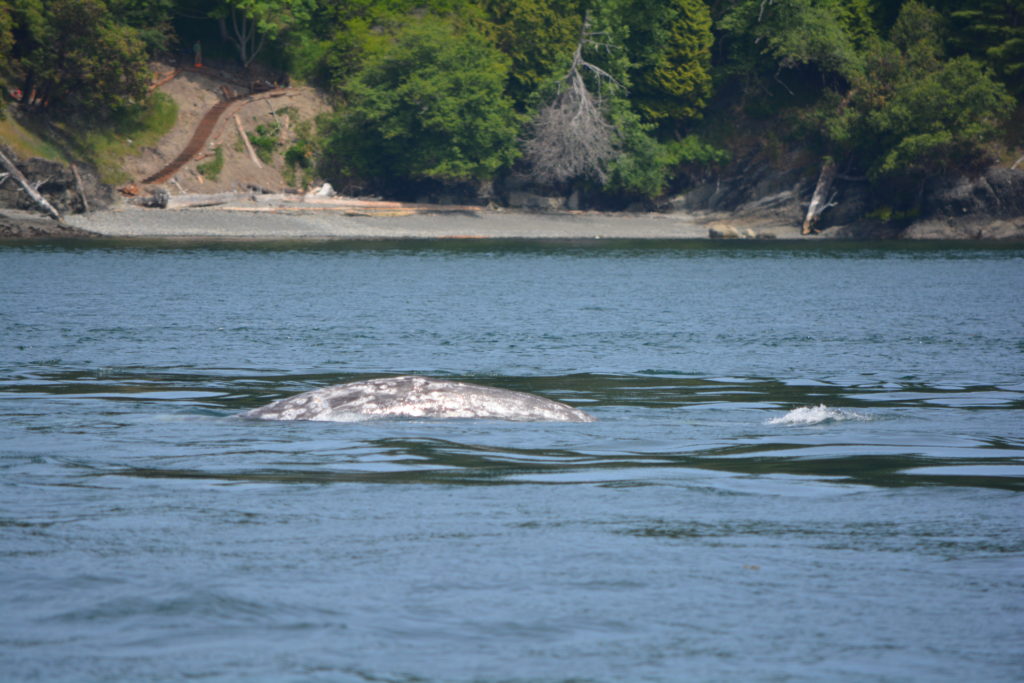 Gray Whale Back – No Dorsal Fins! 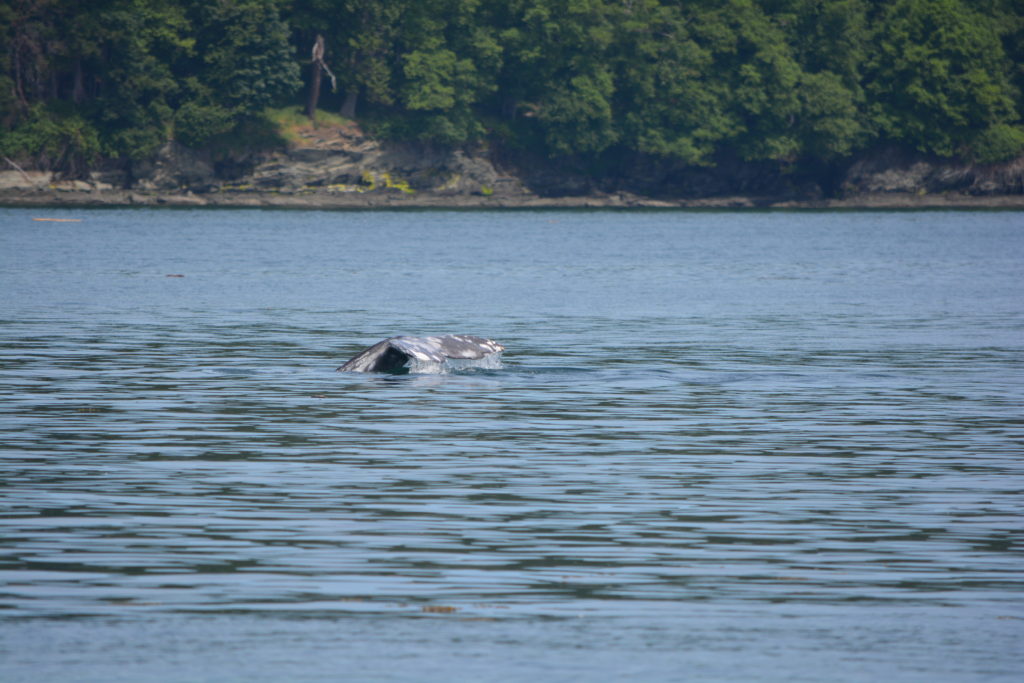 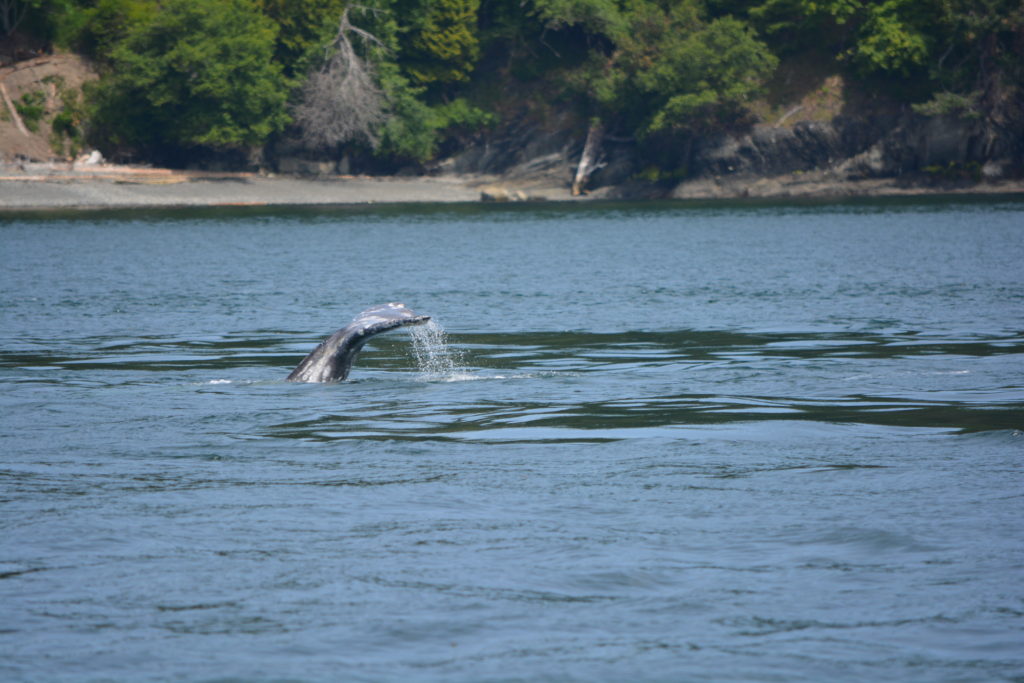 Although it was hard to part with the gray whale, we continued on our adventure to check out some of the Transient orcas that we see throughout this area – the T65A’s. These are the animals we’ve been seeing around here the last few days, and they are so much fun! It’s a family of 5 animals that displays some pretty fantastic hunting and socializing behavior. Gray whales and orcas in the same day? Sounds pretty epic!

We even encountered some Dall’s porpoise – one of the speediest marine mammals out there. These animals can reach speeds of 30 knots (34 mph) when chasing their prey. Their tail muscle, or caudal peduncle, is very pronounced and almost looks like another hump behind their dorsal fin – this aids in their speed-swimming. Porpoises, including these Dall’s, have spade-shaped teeth, very different from the conical shaped teeth of dolphin species. What amazing animals! 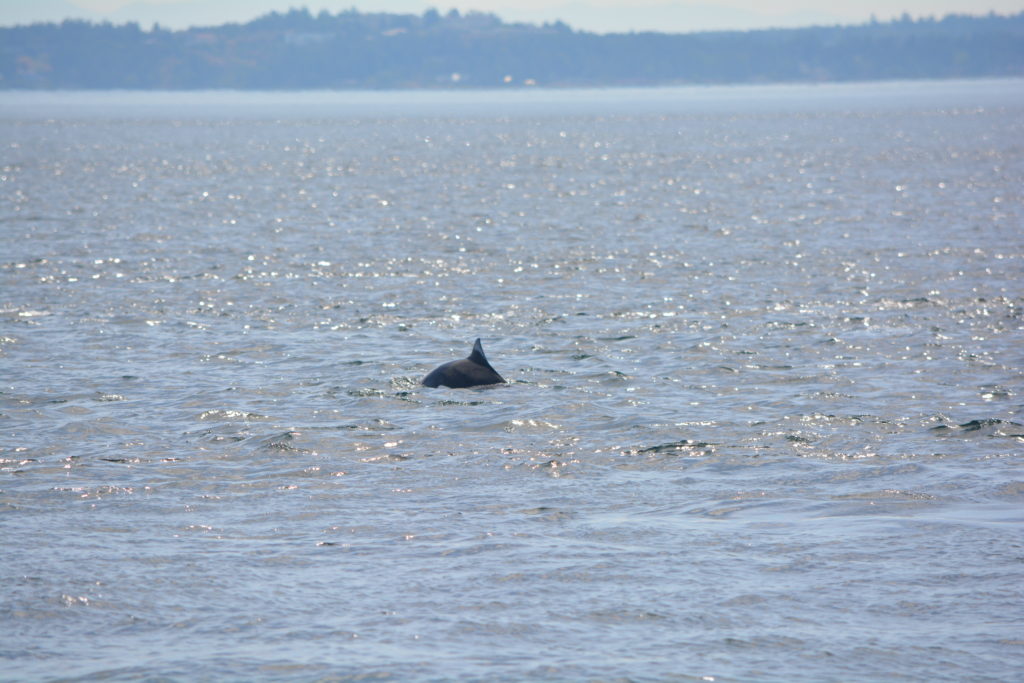 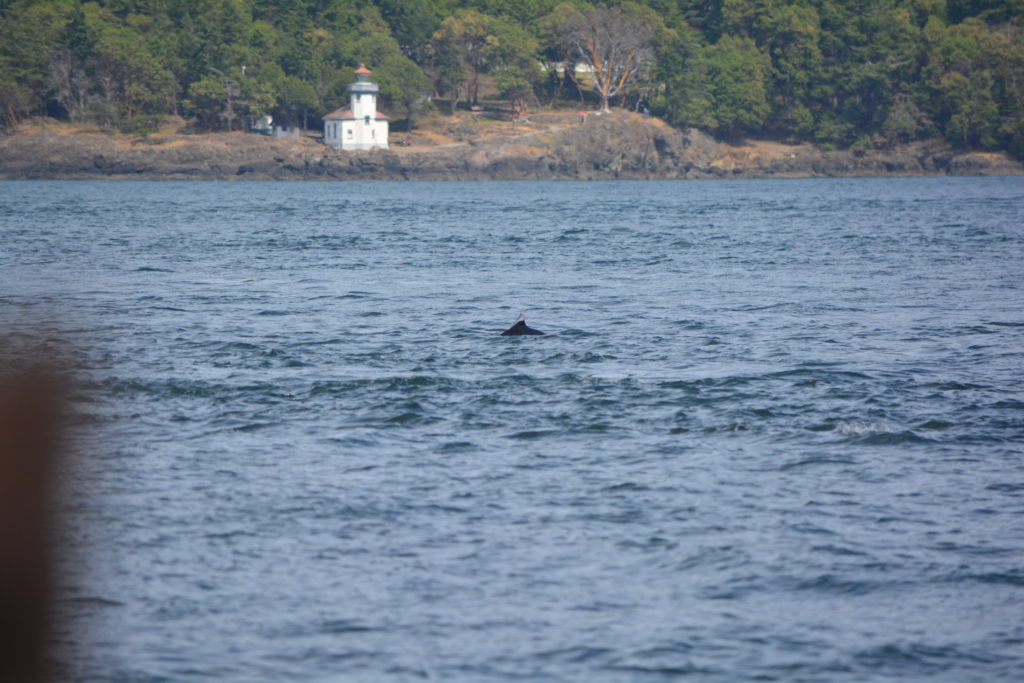 We finished the trip with some beautiful glimpses of some Steller’s sea lions off of Whale Rocks, near the south side of San Juan Island. What an amazing trip! There is so much biodiversity out here, come see for yourself!