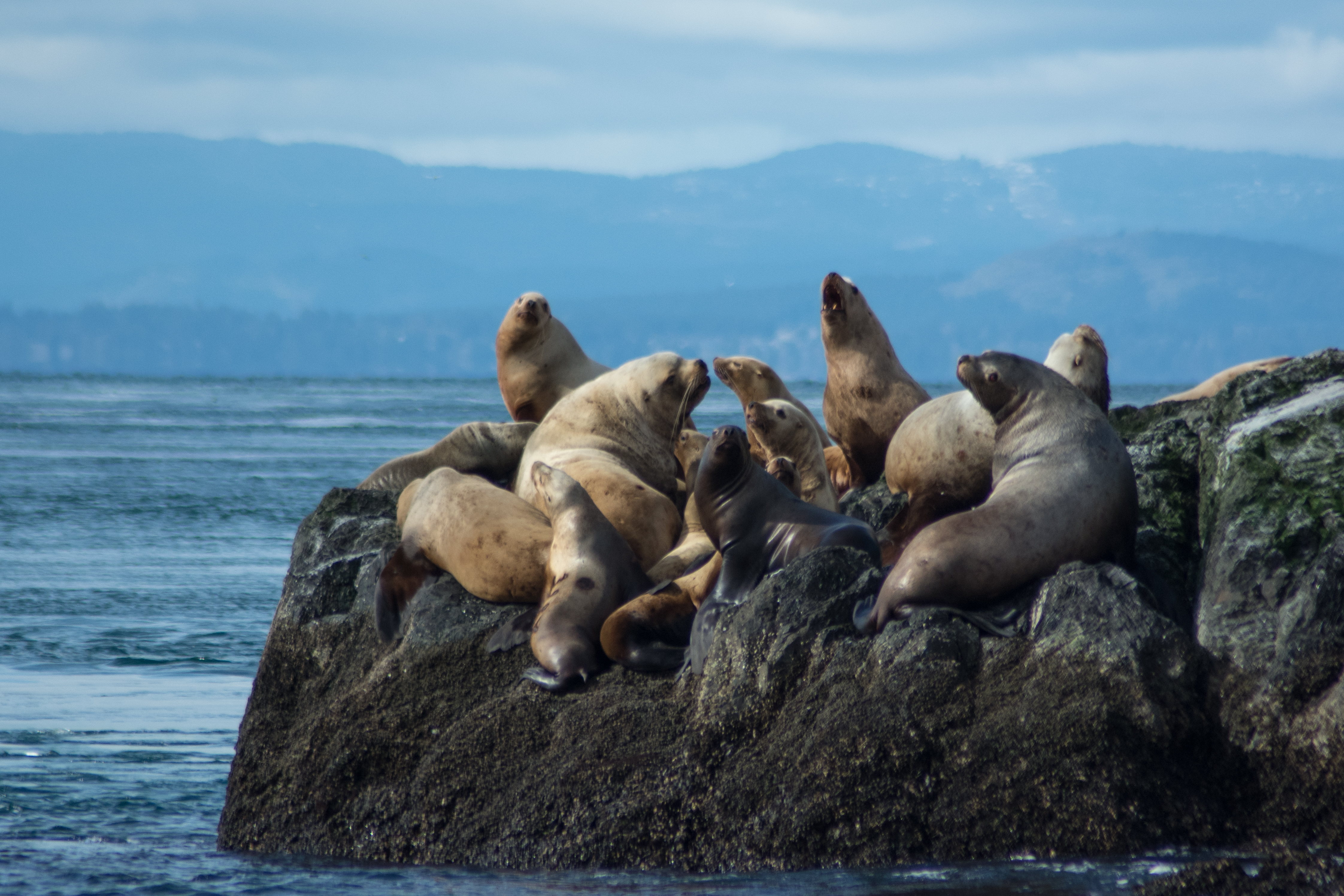 What a spectacular day filled with great people, wild seas, awesome wildlife, and sunshine—at least I think that’s what you call the fire ball against a blue sky.  The stereotype of the Pacific Northwest climate being cold, wet, and gray for months on end has been holding up this spring.  Today we were reminded that the exceedingly dry, sunny days of summer are just around the corner, we hope.

The sea lions were certainly living it up.  I counted approximately 100 of these marine mammals sunning themselves on Green Point.  One blob even made it up into the lush grass.  The exotic ungulates that define Speiden Island were out in force, vacuuming up the tender greens that will soon wither.  And how lucky we were to ogle at least eight stately eagles along the bluffs.  Due to successful conservation efforts made possible by the Endangered Species Act, older generations of Americans have left a legacy which includes a healthy population of our national bird.  The Marine Mammal Protection act is also responsible for the increasing number of humpback whales that we’re seeing in the Salish Sea.  Today an adult humpback surfaced with a mighty blow right alongside our vessel.  Fortunately for us, we were downwind.  That’s not to say all of us stayed dry, however.  Strong wind and choppy water resulted in the soaking of several of our most intrepid guests who held their positions on the exposed bow awaiting such a thrill.

The highlight for most onlookers, no doubt, were the killer whales that we met up with just across the international border.  Active Pass is a busy expressway for British Columbian ferries and orcas alike.  The travelers on this day were the T19s.  The troop consists of 4 transient killer whales, two matriarchs and two adult males.  The brothers, both impressive bulls, are T19s momma’s boys.  T19B, or if you’re inclined toward cheesy names, “Mr. Floppy Fin,” is best known among the bunch for the size and motion of his massive dorsal fin as it slices the water.  We observed the family execute several long dives in search for their marine mammal prey before returning to Friday Harbor with salty tales of whale watching on the Salish Sea.