Killer Whales of the J-17s swimming around Henry Island 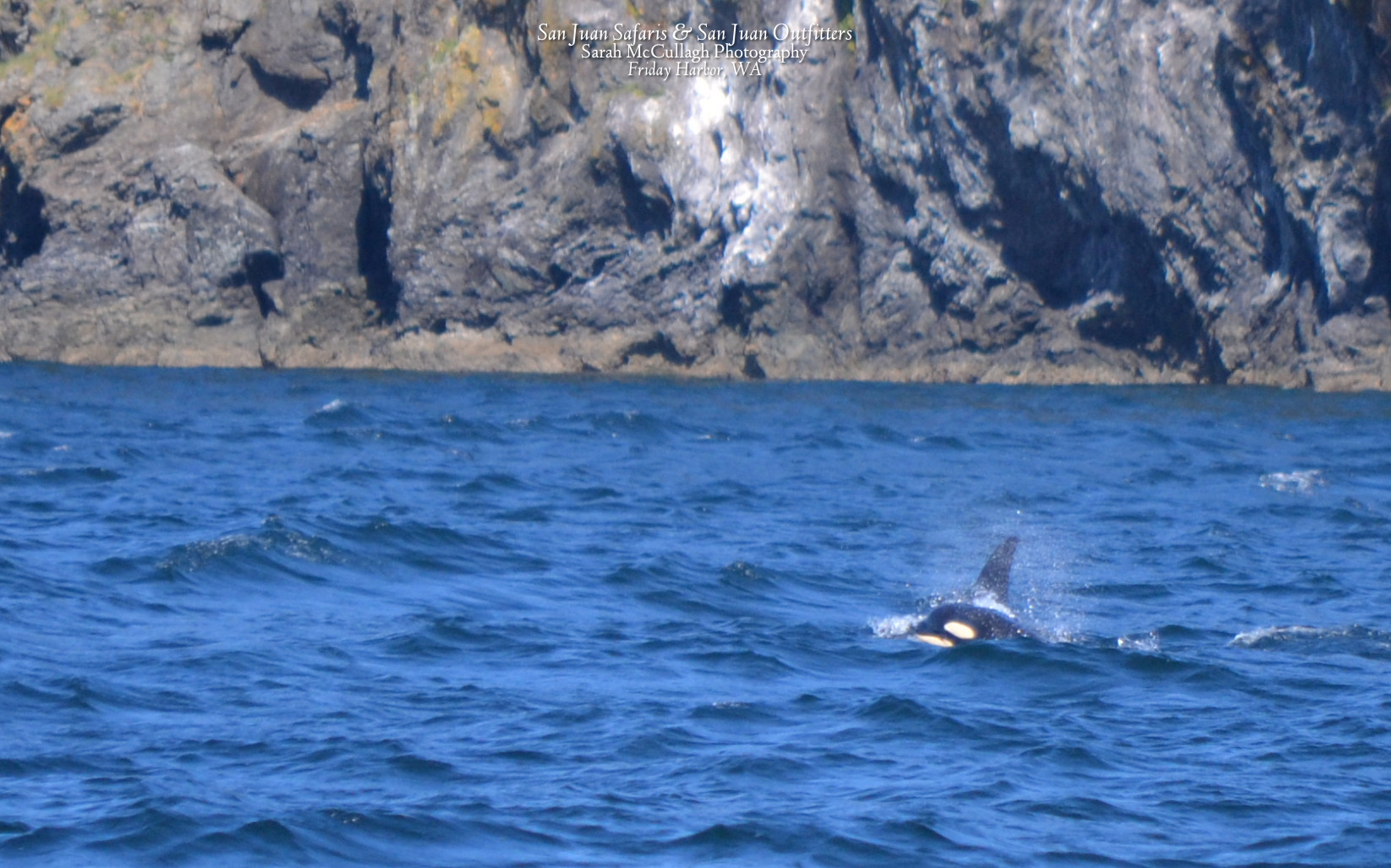 I love baby orcas! This Saturday we got to see a very young one from the Souther Residents playing and splashing in the waves. First though I got to explain ho we got there. The Sea Lion received reports of killer whales off the west side of San Juan Island. We sailed off with Capt. Mike, Naturalist Sarah, and myself to go find these big, black and white animals on another unexpectedly sunny, spring day.

As we motored over to the west side we chatted with our guests about the famous Southern Resident Killer Whales that frequent the waters around the San Juan Islands. Orcas are very specific in their diet and each type hunts only certain marine animals. The Transient (or Bigg’s Killer Whales) only eat marine mammals: seals, sea lions, other whales – hence the ‘killer’ part of ‘killer whale’. The Residents, though, eat only fish, and the majority of that fish, and I mean in the 90% majority, is only one species, Chinook Salmon. As we head toward the famous Resident Orcas, you may be connecting in your minds when the best time to see each type in this area based on what they are eating. Of course! Residents do love to come here in the summer to chase all the salmon that are running to the rivers and streams they were born in, and Transients will be here off and on year round to stalk the plethora of Harbor Seals that call these islands home.

So Saturday was amazing in the fact that we found Resident Orcas come early! We met them just off Henry Island. The small waves hid them a little from farther away, but as we approached definite dark, shiny dorsal fins started to appear. It was two families! Two family groups of J Pod that were travelling and occasionally milling around Open Bay on Henry Island. We were looking at the J-17s! This family group is one of the ones you may have heard of recently because J-28, Polaris, had a calf, J-54, in December! The whole family is led by J-17, Princess Angeline. Her children are J-28 (Polaris) J-25 (Talequah), and J-44 (Moby). We stayed close to Polaris and her calves. Polaris has an older daughter J-46, Star, who was born in 2009. These three Polaris, Star, and the new calf, J-54 swam around Kellett Bluffs and milled around for fish in the waves. It was precious each time to see the tiny dorsal fin of J-54 come up right after its mother’s. Although the new calf is around 6 to 8 ft. long it still looks tiny and adorable next to its large mother who is more than 20 ft. long. The calf stays close next to its mother for awhile after being born for protection, nursing, and learning. We, at least I, were so focused on the mother and child that we almost missed Star breaching! She jumped right in front of the cliffs at Kellett Bluffs and landed with a huge splash. Polaris and J-54 started swimming closer to us and Star, but we unfortunately had to leave, but not before J-54, the baby, spyhopped not once but at least three times to take a look at us and everything else going around on the surface. It was a moment that was super cute and at the same time filled with hope because this calf was super chubby, which means healthy for an orca. The Southern Resident’s population is very low currently and they need a lot of help and healthy babies in order to make a strong come back soon.

As we motored back to Friday Harbor, we stopped to see some of our other cool wildlife. We saw Bald Eagles everywhere on rocks, trees, and in the air. We passed Harbor Seals resting on shore, and Steller’s Sea Lions swimming in the waves as we reflected on another San Juanderful day.