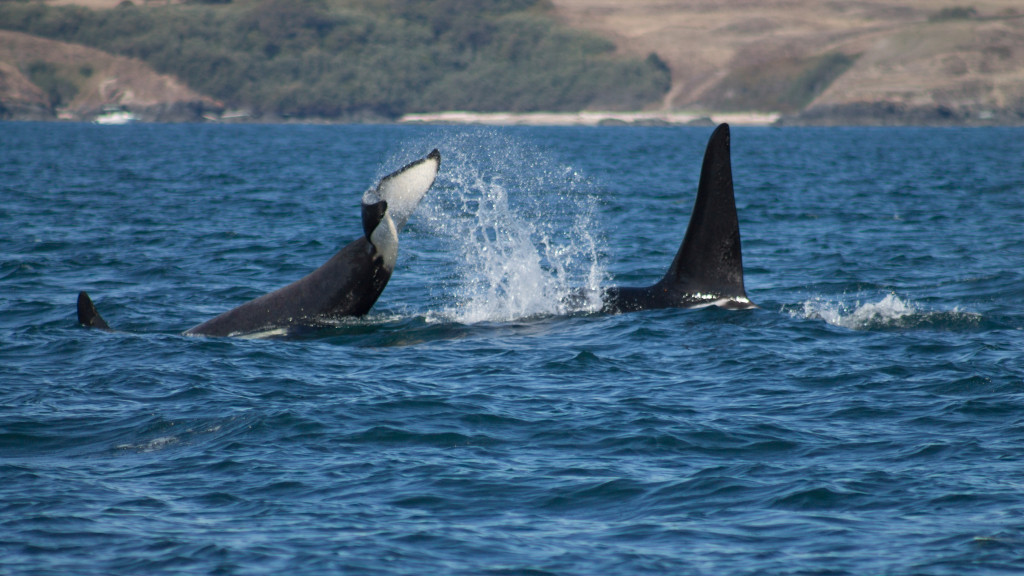 Yesterday we got to take our fast boat out again! Captain Brian, myself, and a great group of people all donning our sleek red and black exposure suits boarded the M/V Kestrel for a super exciting ride. We headed south and shortly stopped to check out a pretty large and active group of Harbor Porpoise hunting in the rips near Turn Island. Usually this species is pretty shy, especially here since they are pretty low on the food chain, but we saw multiple members of these few groups jump through the rips and waves to catch some fish. Next we continued south and stopped at Cattle Point to look at some Pinnipeds. There was a whole bunch of Steller’s Sea Lions hauled out on the rocks here. There were also some swimming and playing in the watering front of the rocks. IT’s always one of my favorite parts to see these giant Sea Lions posturing and sunning themselves like giant flippered bears. There was even one female California Sea Lion here too, which was a great size comparison for the Steller’s Sea Lions which can be more than two times bigger. Next we headed further south and west to find the orcas. We soon did and it was a bunch of members of L pod spread out foraging south of San Juan Island. We first saw L-55 (Nugget) and parts of her matriline travelling and foraging. The orcas around us were very spread out in small groups but all were angled and traveling towards a single point in the distance. After we saw Nugget her son Takoda (L-109) swam past along with his sister, Lapis (L-103) and her new calf (L-123) Lazuli. We saw this calf and its family members play around for awhile as they continued to travel south as well as take breaks to catch fish. Next we moved ahead to see some different orcas. We saw Mystery (L-85) pass as even more swam around in the distance. We then saw some breaches in the distance and a new group made up of Kasatka (L-82), her son Finn (L-116) and her sister, Jade (L-118) flipping around themselves in front of the boat. In the middle of all this a Minke Whale popped through the group of Orcas as well! So many whales! We soon had to head back but not before we stopped and saw a magnificent Bald Eagle perched above us on the coastline. Whelp that’s another beautiful day in the San Juans!