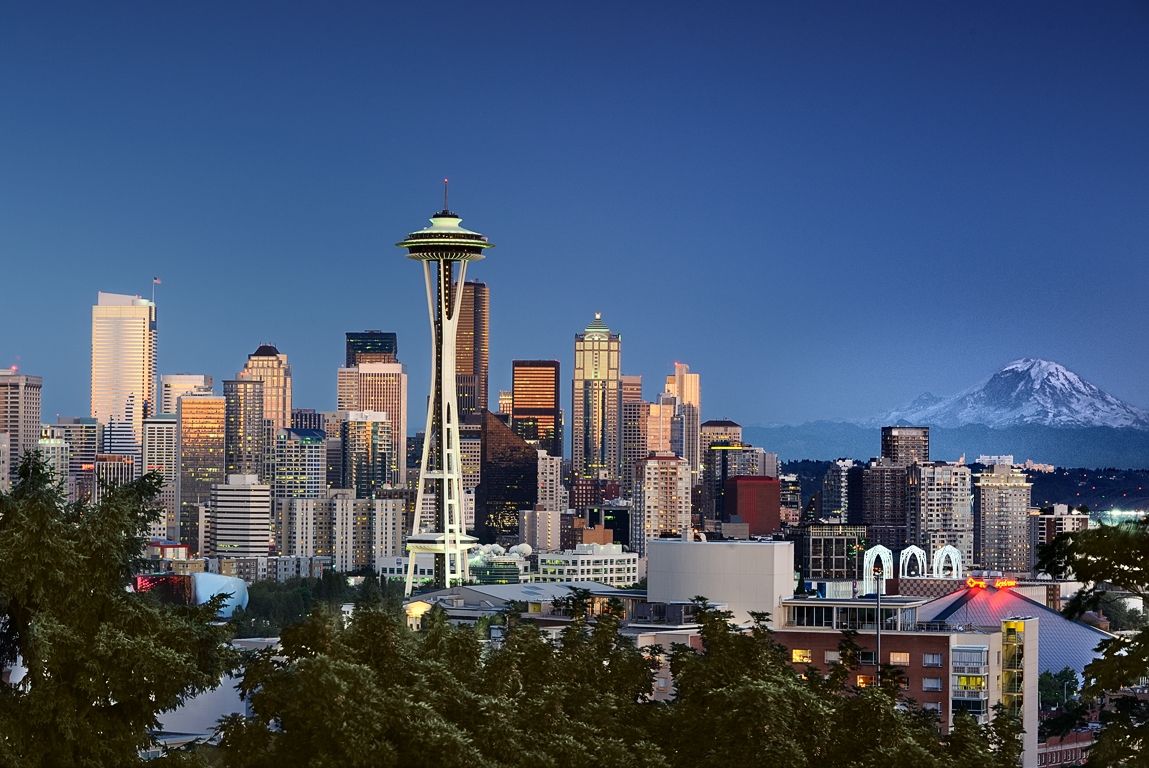 So, you’ve decided to visit Seattle on your honeymoon but maybe you’re not quite sure what to do while you’re up here. The endless list of activities available in this Pacific Northwest urban gem can be daunting, but you’re in luck! We’ve put together a list of the 10 absolute best adventures around Seattle for all types of newlyweds. Be you explorers, theatergoers, history buffs, or just plain hungry, let us help you find your perfect getaway!

When people think of Seattle, one of the first things that comes to mind is the iconic Space Needle. Standing alone on the edge of the skyline, the 1960’s tower does provide a nice view of downtown; however, Seattle locals know the best views are from the observation deck of the Columbia Center. At nearly twice the height of the Space Needle, the 360° view of Seattle and the Space Needle itself, Puget Sound, and the Cascade Mountains, including Mt Rainier, from the top of the tallest building in Washington, is absolutely breathtaking. 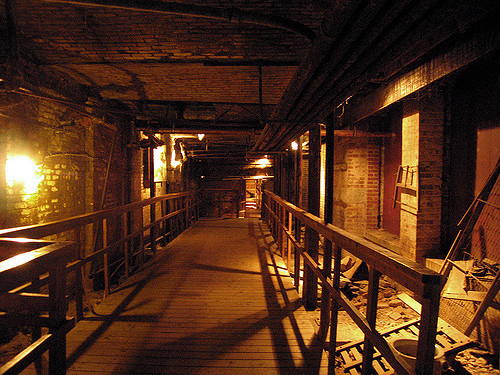 Once you’ve had your fill from the top of the city, head to the bottom to explore a little-known area of Seattle.

Pioneer Square, what was once the bustling heart of the city, was destroyed in a 25-square block fire in 1889. When rebuilding began, investors decided to raise the streets and buildings up a story, escaping the muddy seaside the city was built on, meanwhile small shop owners rebuilt at their original level. These shops were eventually covered over as access to the raised buildings took precedence and the underground sections of the city were forgotten until the 1950’s, when Bill Speidel began running tours for locals who didn’t believe there were buildings down there. Speidel’s tours live on in a humorous walking retelling of Seattle’s past.

The classic version of this tour is family-friendly; however they also offer an adults-only version, regaling guests with a cocktail and a tour of the red-light district of Seattle’s Underground. 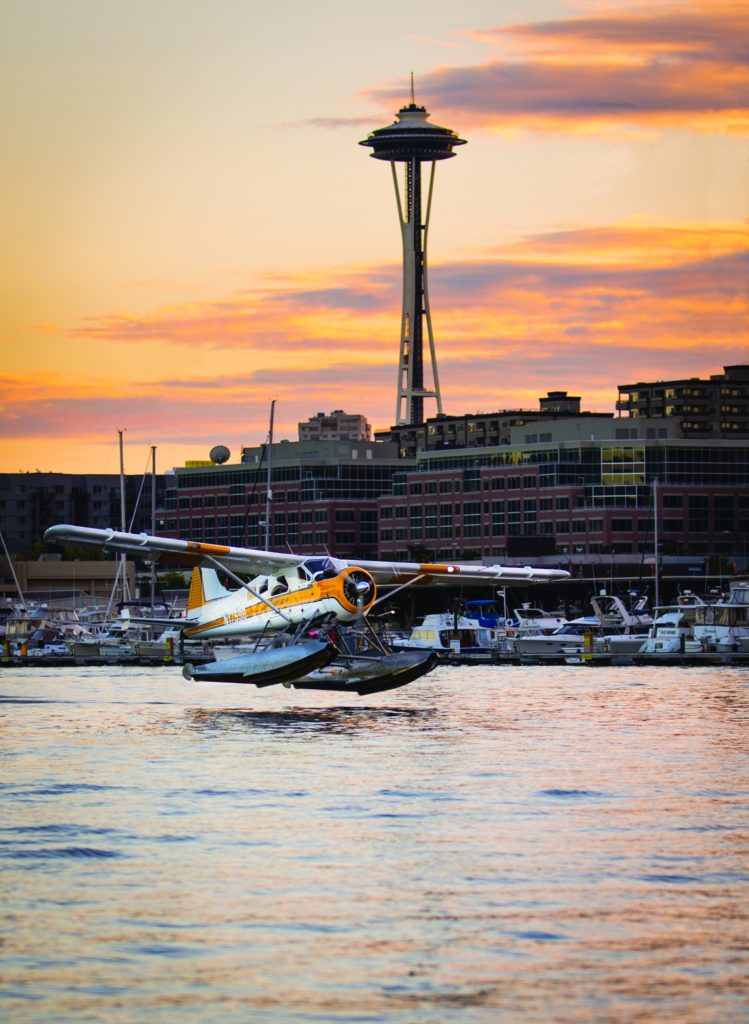 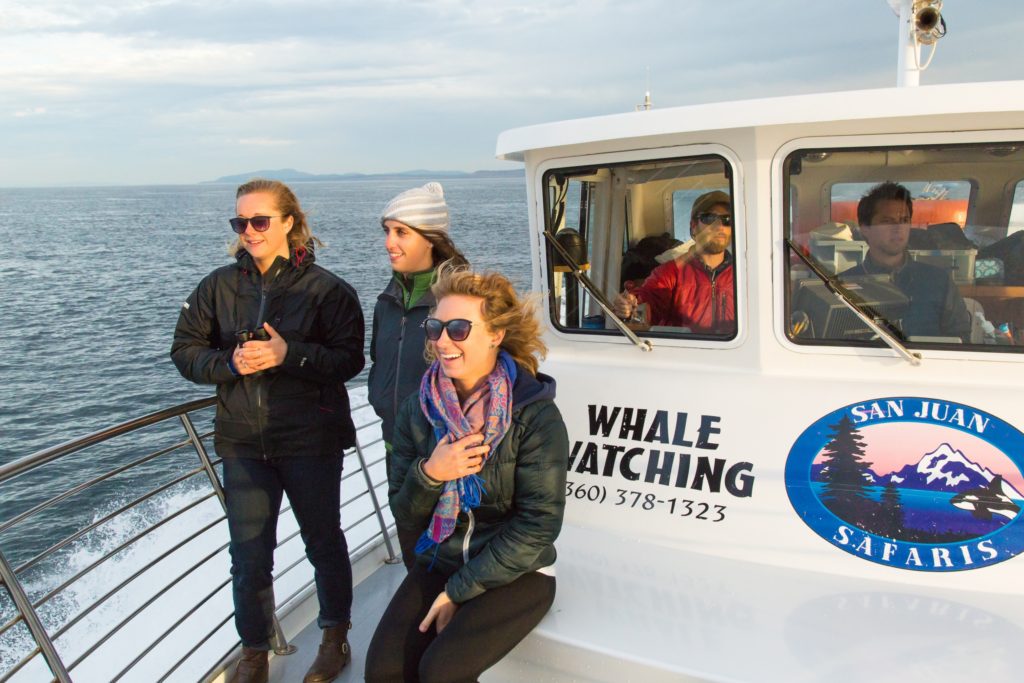 Looking to get out of the city and take in some of the natural beauty of the Pacific Northwest? Head to the water and hop on a plane! Kenmore Air and San Juan Safaris partner to offer the Seattle Orca Whale Watching package which includes a beautiful scenic seaplane flight from Seattle’s Lake Union up to Friday Harbor, a bustling little town on San Juan Island. After landing in the marina, take a minute to explore the restaurants, shops, and cafes Friday Harbor has to offer before boarding either the M/V Sea Lion for a relaxing cruise, or the M/V Kestrel for a more exhilarating tour experience. Your boat will then whisk you onto the Salish Sea for an adventure of a lifetime. Gorgeous scenery and wildlife abound in the San Juan Islands; between the blue horizon, the oases of rich evergreens, seabirds, bald eagles, harbor seals, sea lions, porpoises, and of course, whales, there’s something for everyone on the water. The boat tour lasts three to four hours before returning to town, where you’ll board the return flight to Seattle. The whole excursion, from take-off to landing on Lake Union can last as little as 10 hours, or you can opt to spend a night or two on the island and San Juan Safaris is happy to recommend romantic overnight accommodations in Friday Harbor. 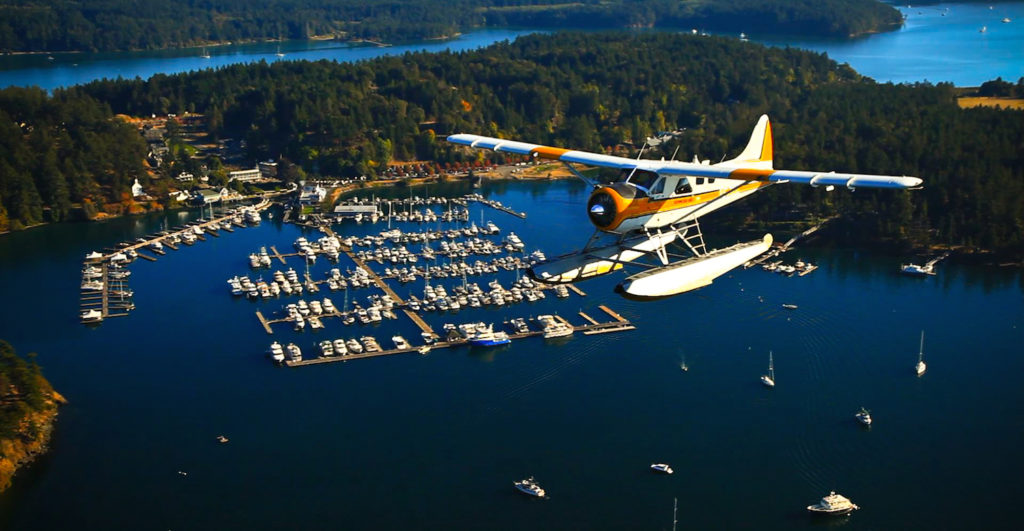 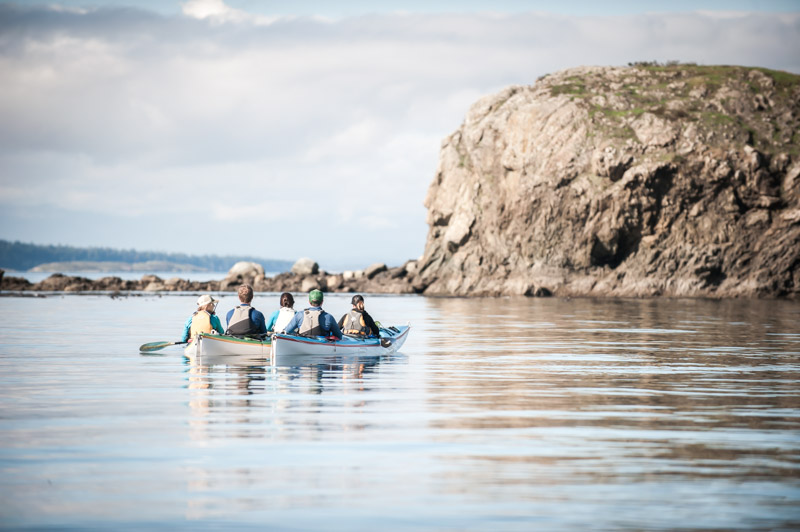 The San Juan Islands aren’t only known for their whales—they’re also renowned for world-class sea kayaking! Whether you’re an avid kayaker or you’ve only ever hoped to paddle around one day, the 3-Hour and 5-Hour Kayak & Fly packages through San Juan Outfitters and Kenmore Air offer something for every age and experience level. Start your adventure at the Kenmore Air base on Lake Union in downtown Seattle and enjoy a beautiful seaplane flight up to Roche Harbor on the northwest tip of San Juan Island.

Upon landing in the marina, just follow the docks to meet your expert kayak guide who will get you all geared up and instruct you in paddling basics before pushing off into the waters of the Salish Sea. Here you might encounter a variety of wildlife including sea stars, chiton, jellies, harbor seals, otters, and if you’re lucky, maybe even orcas!

As you paddle through the wonders of nature, learn about the ecology of this beautiful inland sea, run your hand through the chilly saltwater, and even taste a bit of bull kelp! If you opt for the 5-hour tour, pack a lunch, as you’ll be stopping on a remote beach to refuel, recharge, and watch the world float by. After returning to the docks, prepare for the final leg of your adventure—the scenic return flight to downtown Seattle! Kayak tour can be booked as either public or private, just chat with a San Juan Outfitters reservations agent for details.

After working up an appetite kayaking in the Salish Sea, head to the iconic Pike Place Market and join a guided tour of Seattle’s delicious food scene with Savor Seattle. Book your tickets in advance for the two-hour Signature Food Tour of Pike Place Market which includes 16 or more tastes from vendors throughout the market. Your tour guide will entertain you with the history of the world-famous market as you skip straight to the front of every line. Learn about this century-old Seattle staple while peering off towards the Puget Sound and indulging in some of the tastiest morsels the city has to offer. 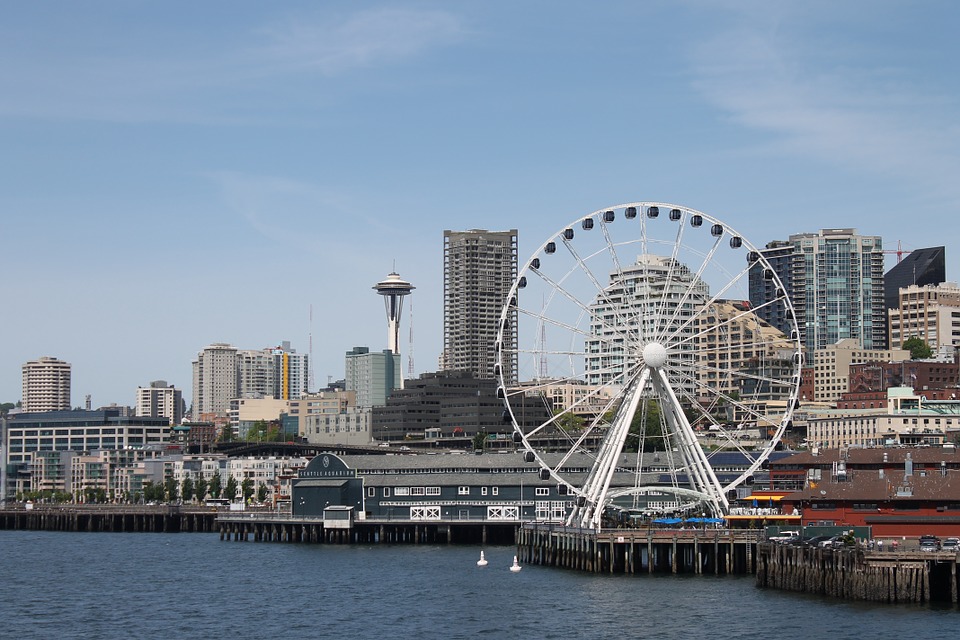 While you’re on the downtown Seattle waterfront, make sure to make a trip to The Seattle Great Wheel for a beautiful view of both the Puget Sound and the skyline! Each trip on the seaside ferris wheel lasts three full rotations inside a glass-walled gondola. General admission gondolas hold a maximum of 8 passengers; however, guests have the option to purchase VIP tickets which include a private gondola for up to four people with leather bucket seats, a stereo system, glass floor, VIP t-shirt, photo booth photos, an escort to the front of the line, and a champagne toast at Fisherman’s Restaurant, located just behind the Great Wheel. All gondolas are available on a first-come, first-served basis and cannot be reserved, but either ticket is sure to be a magical experience.

For you honeymooners who would like to be wined and dined while taking in some of the world’s most unique theater, allow Madame ZinZanni the honor. Teatro ZinZanni is held inside an antique European performance tent where a combination of “improv comedy, vaudeville revue, music, dance, cirque, and sensuality” entertains you over a three-hour five-course gourmet meal. The performance bulldozes the fourth wall and pulls the audience into the story for a night you’ll never forget. General admission ticketholders are typically sat at communal tables, however private tables for two are also available.

If you’d prefer to take a romantic meal off a blanket in the grass, consider picnicking at Gas Works Park on the north shore of Lake Union. As both a Seattle City and Washington State Landmark, Gas Works Park provides views of the Seattle skyline and the vestiges of the old Seattle Gas Light Company gasification plant, making for an extraordinary backdrop to a special moment with your new spouse. 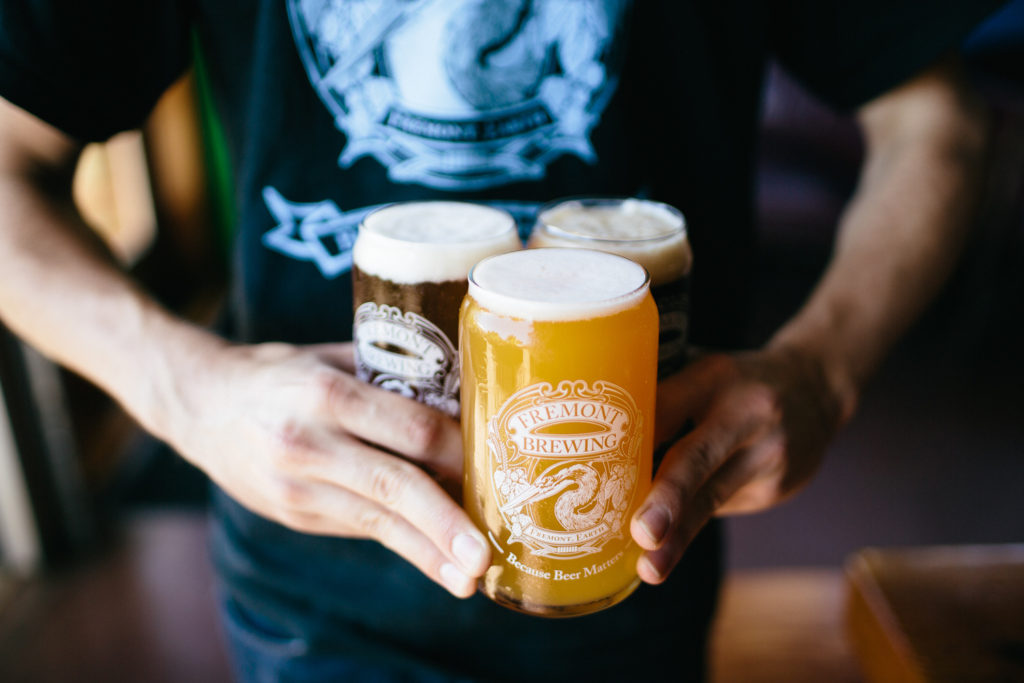 Continuing just a little way north you’ll find the famous Fremont Brewing. Known for environmental, social, and economic sustainability, and great small-batch artisan beer, this brewery, founded in 2009, is now a north Seattle staple. The Urban Beer Garden is open daily and offers a huge variety of Fremont beers on tap; they also encourage you to bring your own food or to order from a local eatery, with menus provided. 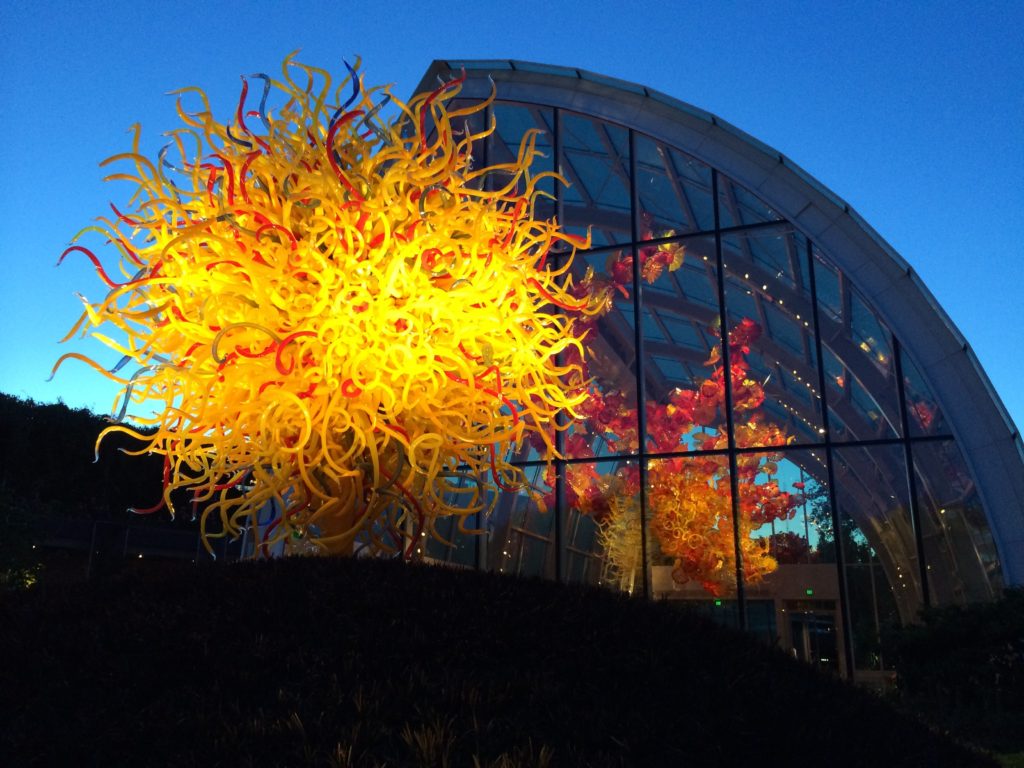 Delicately balanced in the shadow of the Space Needle is a collection of work of the world-famous glass sculpture artist, Dale Chihuly. Wander through the fanciful gardens and Glasshouse and take in Chihuly’s exceptional mastery of an incredible artform. A General Admission ticket provides entrance to the galleries, gardens and Glasshouse, or a Package Admission ticket can be purchased, which includes a ride to the observation deck of the Space Needle. Either ticket option would be an outstanding cherry-on-top of a marvelous, rejuvenating, and romantic honeymoon in Seattle