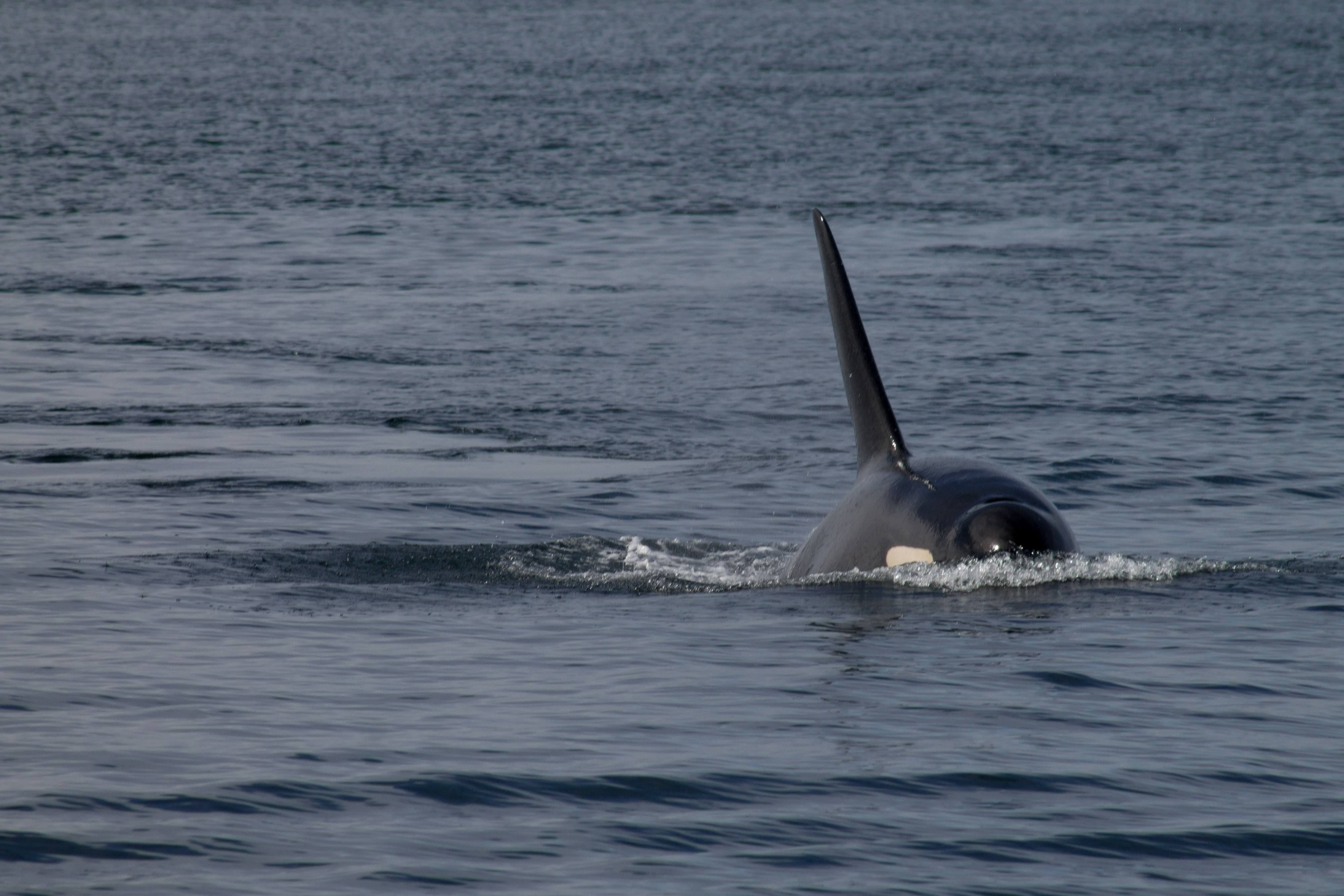 Of the three pods that make up the Southern Resident community, K pod is the least frequent visitor to our waters. Today, however, we had the special opportunity of watching a rarely-sighted family group from K-pod, the K14’s. The K14’s are led by matriarch Lea, a 39-year-old female and mother of three. Her sister, Opus, has one 14-year-old son, Sonata, whom we watched for the majority of our trip today.

Being a 14 year old boy, Sonata is still sprouting, meaning his dorsal fin is still in the process of straightening out and growing taller and taller until it reaches the impressive 6 foot height that is the distinguishing characteristic of an adult male orca. Because he’s still growing and putting on weight and blubber, he has to eat a LOT of salmon. An adult male orca needs about 600 pounds of food every single day just to maintain his impressive body weight of 8,000 pounds!

When we arrived at the northern end of Haro Strait, the K14s had just paused to peruse the area for prey. Being resident killer whales, their favorite meal is the Chinook salmon, a large 2 to 3 foot long salmon that can get up to 40 pounds in weight. From the looks of it, Sonata was having a very successful day hunting. He plashed and circled one area after another, spending a lot of time underwater then surfacing again in a completely unexpected location and changing direction fast. We got some amazing looks at Sonata in action as he banked sideways, showing off his white underbelly, then banked hard in the opposite direction in pursuit of his next fishy meal.

With salmon stocks sitting at a historical low of 7% of their normal amount, Southern Residents have been struggling to stay well-fed. It’s so wonderful and hopeful to see a young male like Sonata hunting his heart out and having a hearty meal to help him grow to full size!

To help salmon (and therefore orcas) in the Pacific Ocean, we always encourage people to steer clear of farmed salmon and only eat wild-caught, sustainably sourced seafood. Farmed salmon are known to spread foreign diseases to their wild counterparts and have a surprisingly detrimental effect on the environment.

Another huge step to helping repopulate Chinook salmon is to advocate for the removal of hydroelectric dams in the main salmon run rivers like the Snake River and the Columbia River. This website has a lot of good information and links for petitions and ways to contact your legislature to help prompt that change from our politicians!