by Whale Watching Naturalist | May 1, 2016 | Uncategorized 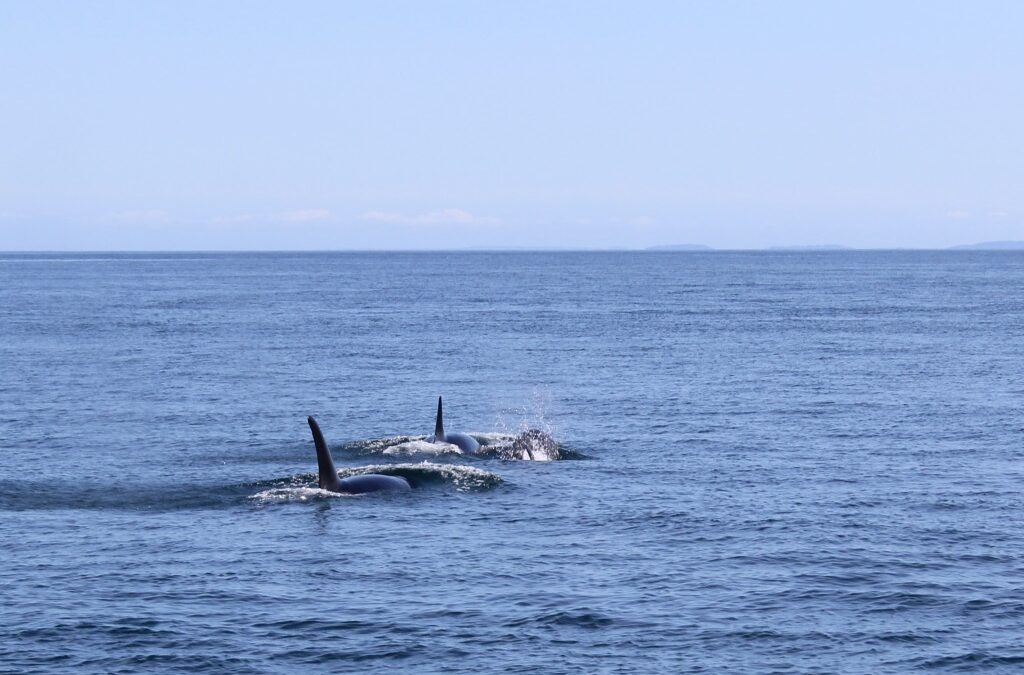 Sunny days and shiny Orcas! The Southern Resident orcas still seem to be on hiatus until more salmon start their runs back to the rivers along the coasts of Washington and British Columbia, but that doesn’t mean there are no orcas in the area. Two ecotypes out of the ten worldwide frequent our waters of the Salish Sea. The others are the Transient Orcas. These orcas are a little bigger, travel in smaller groups, and hunt marine mammals exclusively! So if you do come in the spring or late fall this is the ecotype you are most likely to spot, and those are what we were watching for this Saturday.

Sunny days here in spring are rare but not as rare as seeing one in Seattle. The islands are located in a double rain shadow the runs from Victoria, B.C. to Sequim, WA. The Olympic Mountains and the tall peaks of Vancouver Island block a lot of rain, and we receive half as much rain as Seattle receives. So most of our sunny days in the spring we exist in a hole of sunshine and can see the clouds bringing rain to all the lands surrounding us. This Saturday though, it seemed that all of Washington and southern British Columbia were getting a rain sunny spell, and set out on the calmest ultramarine water towards the west side of San Juan Island. Haro Strait is on the west side of San Juan Island and it is the biggest piece of water closest to us, so once we rounded the corner at Cattle Point – after, of course, admiring the grumbly Steller’s Sea Lions walking over their sleeping comrades on the rocks – the search was on. As we got closer and closer to Canada, we started to see blows. Tiny puffs of mist broke up the clear, sunny air and dark, shiny fins sliced the calm waters. It was the T65As! There are a Transient family groups up and down the west coast from Baja California to Alaska and they can move the whole length if they wanted to, but usually we see the same general families in the Washington-British Columbia area. This family makes a few appearances every year, and they’re super. T65A is the mother/matriarch and is charge of a small family of a few children. This is the normal pattern for Transients, and this group was just that with a few tag along, it looks like another family was travelling with them for a while. It was so spectacular to see this family travel and play and search for their main prey, the Harbor Seal, in Haro Strait. It was great to see the two families dynamics, how even the older son – in his adolescent stage of ‘sprouting’ – stayed very close to his mother. Two younger ones from two different families seemed to be having a blast playing with each other and splashing about.

We soon had to leave those two families, but that’s not all two more blows were seen in the distance, and they were big. We soon could spot two Humpback Whales! Humpbacks stop in here on their annual migration to rest and eat before they continue along their journeys. This particular Humpback is nicknamed ‘Big Mama’ and she has brought now six calves into this area, and today she had another one with her. For reference the baby Humpback is only a little smaller than an adult orca and Big Mama is almost 50 feet long. We watched mother and child rest and eat for a while, probably both thankful for the break from the rough waters of the North Pacific. What a great day, it is pretty special to see two of our large cetacean species in the same day and doesn’t happen often. We soon headed back to Friday Harbor with unparalleled views of Mt. Baker, the Olympic Mountains, and even Mt. Rainier almost 100 miles away!

Until next time whale folks, keep having a San Juanderful spring! 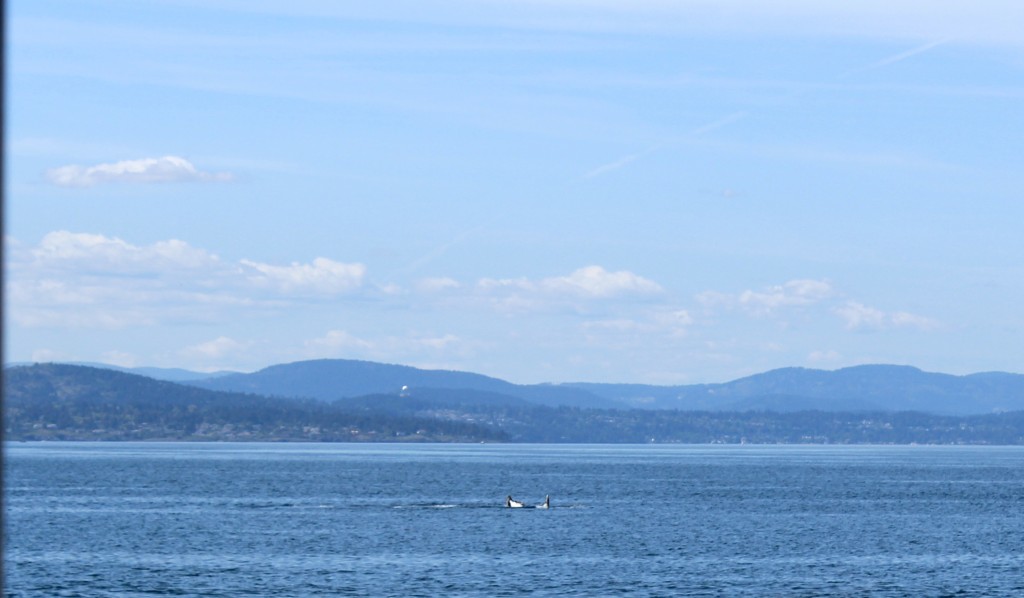 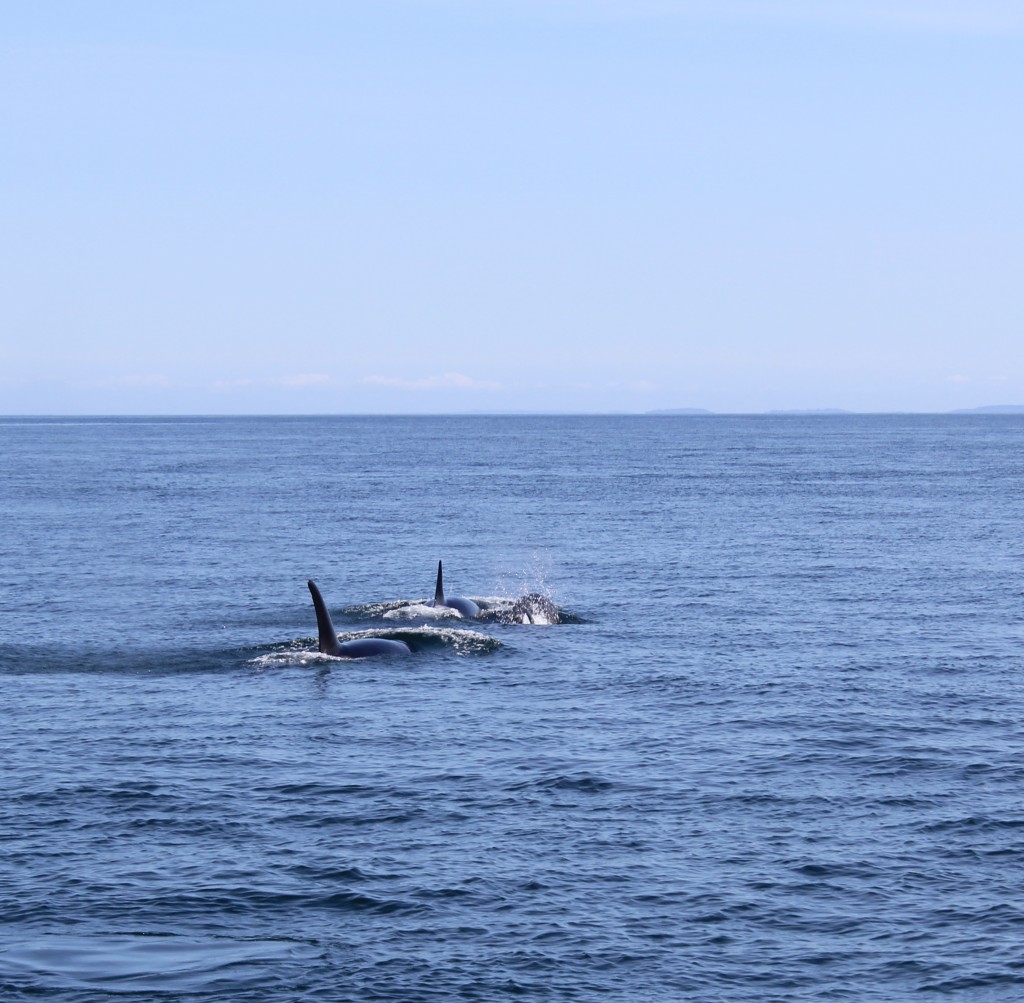