A Surprise Minke Whale and Two Humpback Whales in the Strait 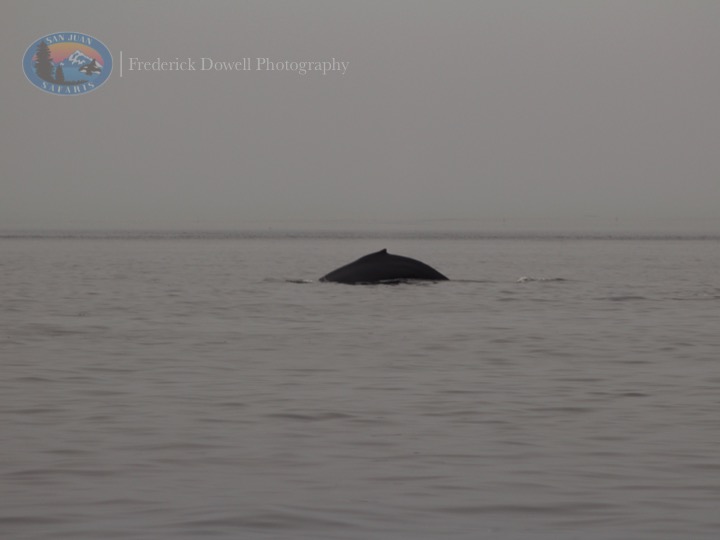 For our second trip on Tuesday we went on a little search aboard the M/V Kestrel. The cool smokey fog still was hanging around. Captain Mike and I journeyed south towards Cattle Pass. We made a stop at one of my favorite places – Whale Rocks. We saw a large assortment of both Steller Sea Lions and Harbor Seals. These Pinnipeds love lounging around these basaltic islets that mark the narrow entrance to San Juan Channel. When both the Harbor Seals and Steller Sea Lions are moving around the rocks it is easy to show folks what I think is the largest difference between true seals (Phocids) and true sea lions (Otariids). Seals are not very mobile on land. They can scoot and roll and that is about it. Their hind flippers can’t be rotated so they can’t walk on them. While the sea lions have long flippers that they can walk on and stand with their heads high above the ground and sometimes even run at a pretty good speed. This afternoon, most of these pinnipeds were pretty lazy but there was one Steller Sea lion that was trying to get on the rocks, but unfortunately kept getting chased off by another Sea Lion. Most of the seals remained calm and asleep on their own personal yet smaller rock.

Next we continued south to Salmon Bank. Salmon Bank is basically an underwater extension of San Juan Island that juts out below the waves from Cattle Point, the southernmost point of San Juan Island. Like many parts of the islands and other banks in the Salish Sea, Salmon Bank is a large Sandy underwater hill that was left by the glaciers that used to cover this region thousands of years ago. These banks through out the sea serve as great area that concentrate nutrients and plankton just around and atop their shallow bathymetries. With concentrated nutrients and plankton these are great places to find larger animals that like to feed on plankton or the things that eat plankton or the things that eat those things aka whales. We found a large assortment of birds going crazy and camped out there. These ‘bird-nados’ as I call them are called baitballs because these birds are gathering in one area to feed on a large school of tiny fish just under the water’s surface. Those fish are usually being corralled there by some sort of marine mammal, so we usually stop at these to see what kind of marine mammal is causing this- a seal, a sea lion, or maybe a whale? We waited and waited and re-learned that whale/wildlife watching is mostly about patience. Then we saw a Minke whale pop up on the other side of the bait ball. These cute little Baleen Whales are a year round resident to our local waters. Minke Whales are not very well studied and are smaller in size than most baleen whales. Usually around 30 ft long, these pointy nosed whales feed mostly on small fish. This Minke swam around and through the bait ball even lunge feeding a few times giving us a good view of its upper jaw and baleen! We sat there for a while with the motor off just enjoying the calm water and the Minke Whale feeding. One time it was underwater for a while and the Minke Whale popped up on our other side suddenly and surprised all of us! 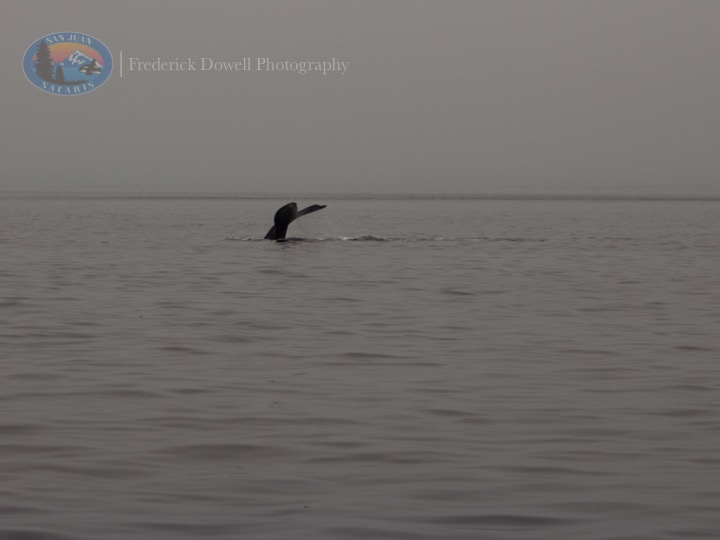 After that amazing encounter we headed further west into the Strait of Juan de Fuca. Just south of Trial Island we saw two larger blows off the water. It was two Humpback Whales swimming east and feeding in the Strait. Humpback Whales are also a baleen whale but much larger than the Minke Whales. These whales are around 40-45 ft. All the Humpback Whales in the north Pacific Ocean are currently heading south to various breeding grounds. We watched these giants travel through the hazy afternoon until it was time to head back. It’s not everyday that we get to see two species of baleen whales in one trip! Whale folks, until next time,