Surprise whales in November in the San Juan Islands 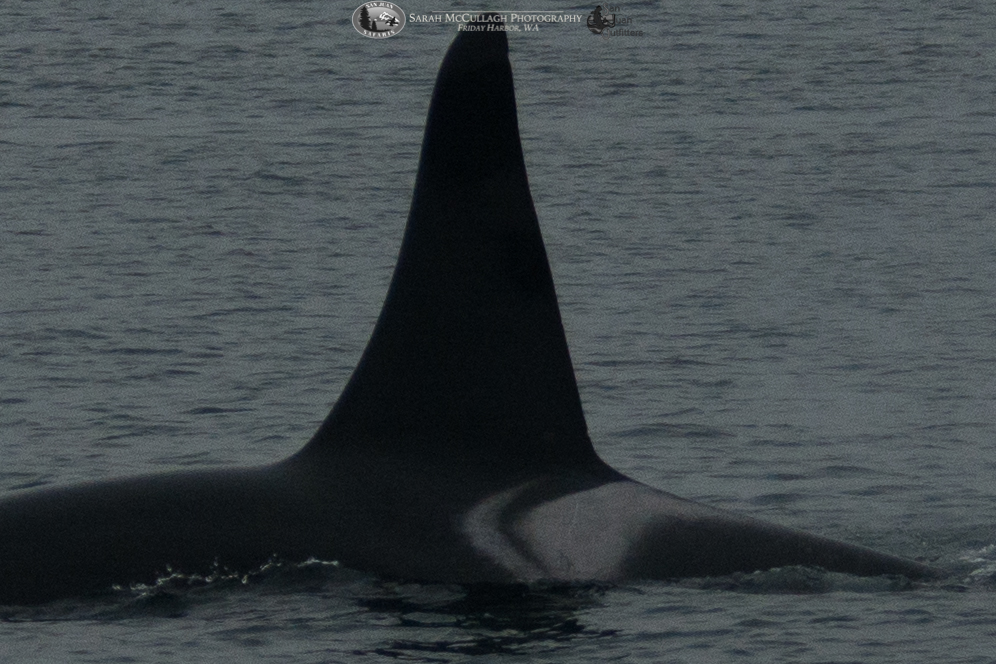 In November, there is no telling what might happen wildlife-wise out on the water. This uncertainty makes whale watching this time of year particularly exciting as we have no idea what we might find! Our November 4th whale watch was no exception.

Leaving Friday Harbor with light flurries in the air we had no reports of whales or other wildlife, which is normal for this time of year as there are fewer boats out on the search! Working with our elaborate spotting network is one of the ways we can find whales. The other? To find them ourselves! Captain Brian, Naturalist Rachel and I elected to head north towards Boundary Pass in order to cover water that had not yet been looked at by the whale watching fleet.

To start the day off, we found a large group of harbor porpoises just north of Jones Island at the mouth of Presidents Channel. These small cetaceans are some of our most common marine mammals in the Salish Sea. Usually these porpoise will be in small groups of 5-6 individuals, but looking around the boat we probably had more like 150 animals surrounding us!

Leaving the porpoises behind we pushed further north into Cowlitz Bay. There were huge aggregations of birds on the surface, mostly gulls and medium-sized divers. We decided to sit and wait to see if anything came up in and amongst the avian feeding frenzy. Poof! We were rewarded for our patience with an awesome minke whale encounter! Minke whales are some of the most mysterious whales in the world. In our area it’s estimated that we may only have a population of only 24-30 animals, which is not that many, but it is thought to be one of the densest populations of mike whales on the west coast. These small, 30 foot-long, whales are closely related to blue and fin whales, the largest creatures on planet earth! Minkes belong to a group of whales known as the mysticetes, or baleen whales. This means that instead of having teeth in their mouths they have keratin plates that hang down from the roofs of their mouths, which they use to filter their food from the water!

After a wonderful encounter with the minke whale we again headed north. Not five minutes later, Captain Brian was giddy with excitement, “I think we’ve got orcas right up ahead!”

Sure enough, about a mile away, there were the telltale dorsal fins and blows of a tight group of orcas. As we approached, one of the large males exploded into the air and crashed to the surface in a full breach. Upon closer observation we realized that we had the L54 matriline of Southern Resident killer whales in front of us. L54 “Ino” and her two sons L108 “Coho” and L117 “Keta” travel with the two, orphaned adult males L84 “Nyssa” and L88 “Wavewalker” in a tight-knit group of five individuals. This is the rarest family within the Southern Resident community, often traveling away from the rest of L pod. This unique population of killer whales is best characterized by their diet of almost exclusively Chinook salmon.

After an amazing, solo encounter with the killer whales we headed back towards Friday Harbor. You never know what you’ll find this time of year!

Please enjoy some photos from the trip! 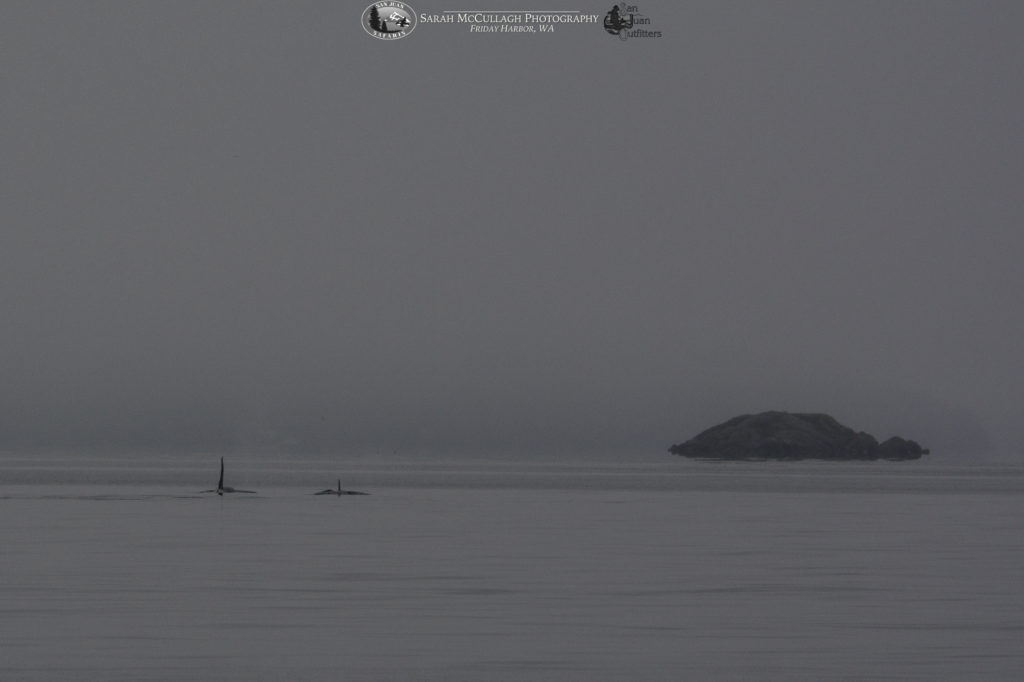 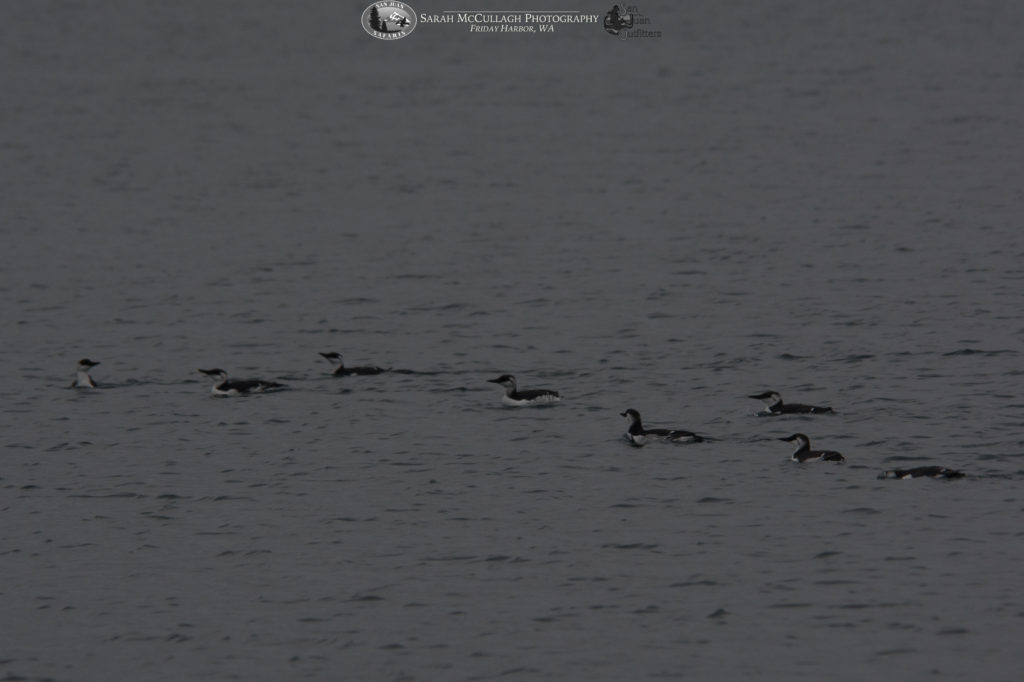 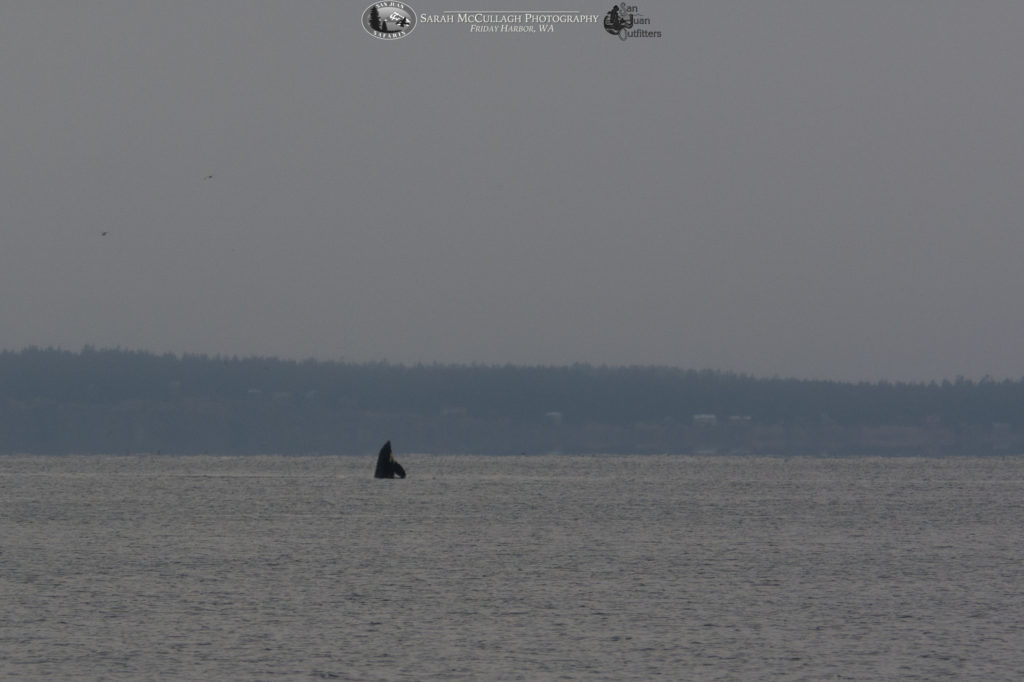 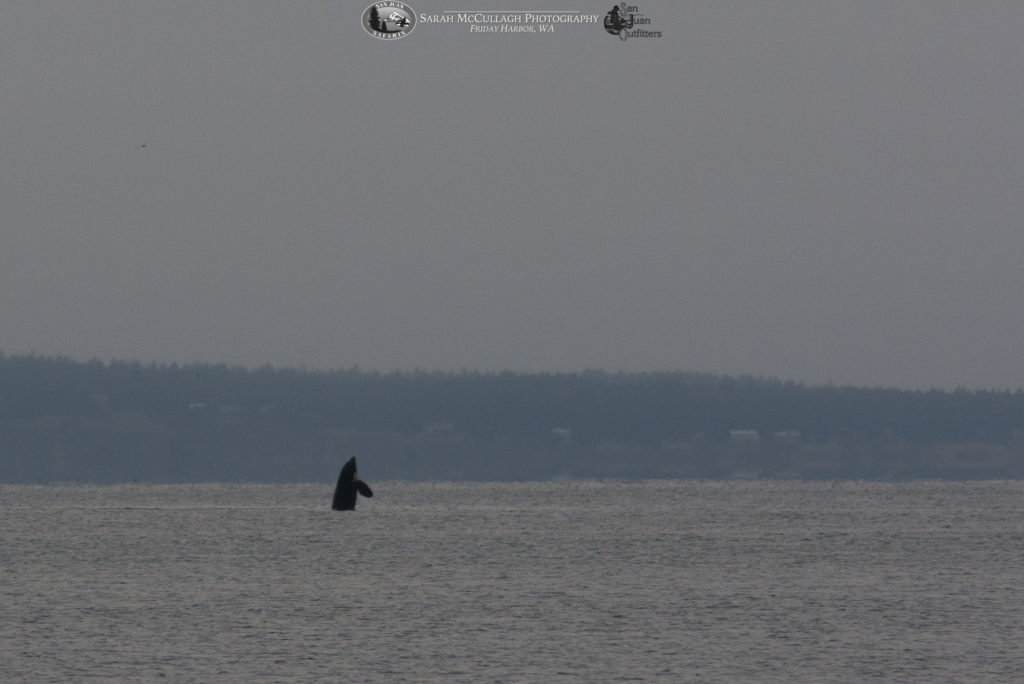 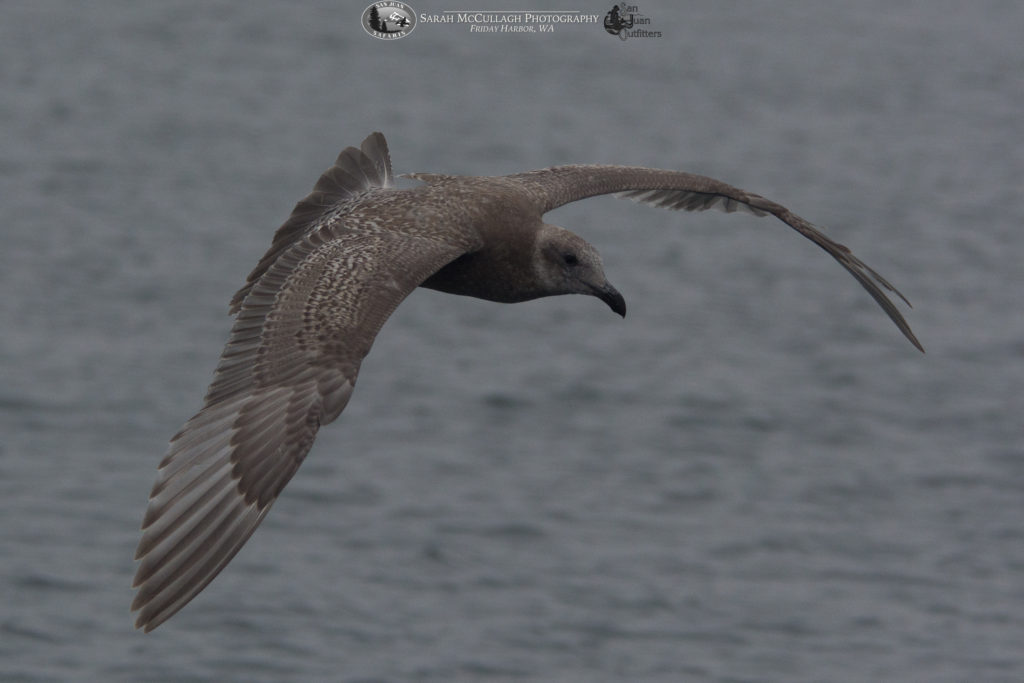 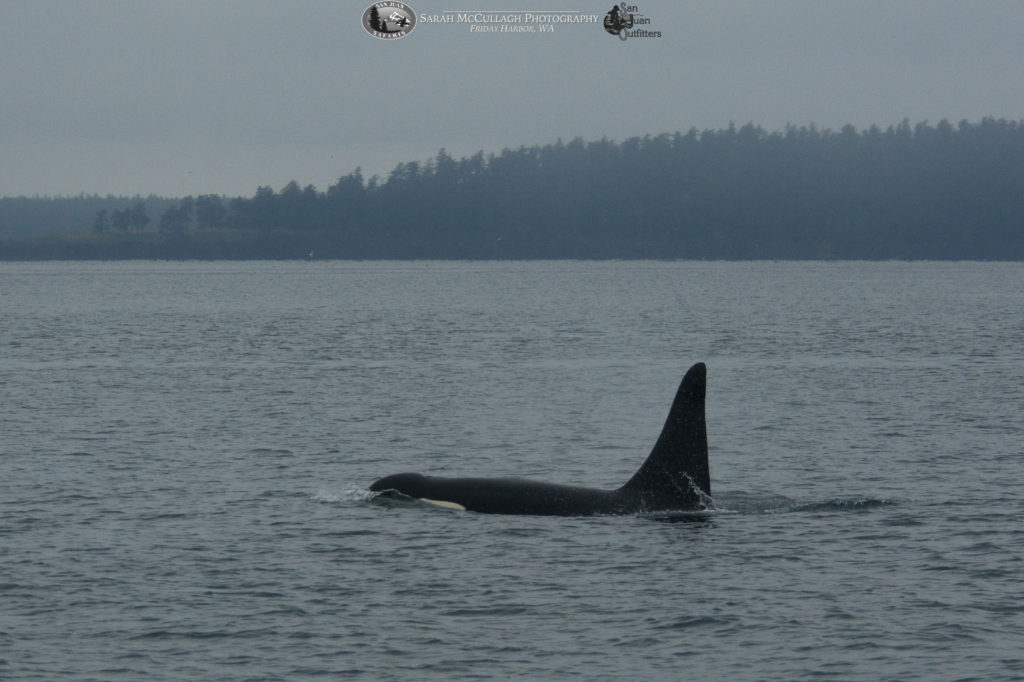 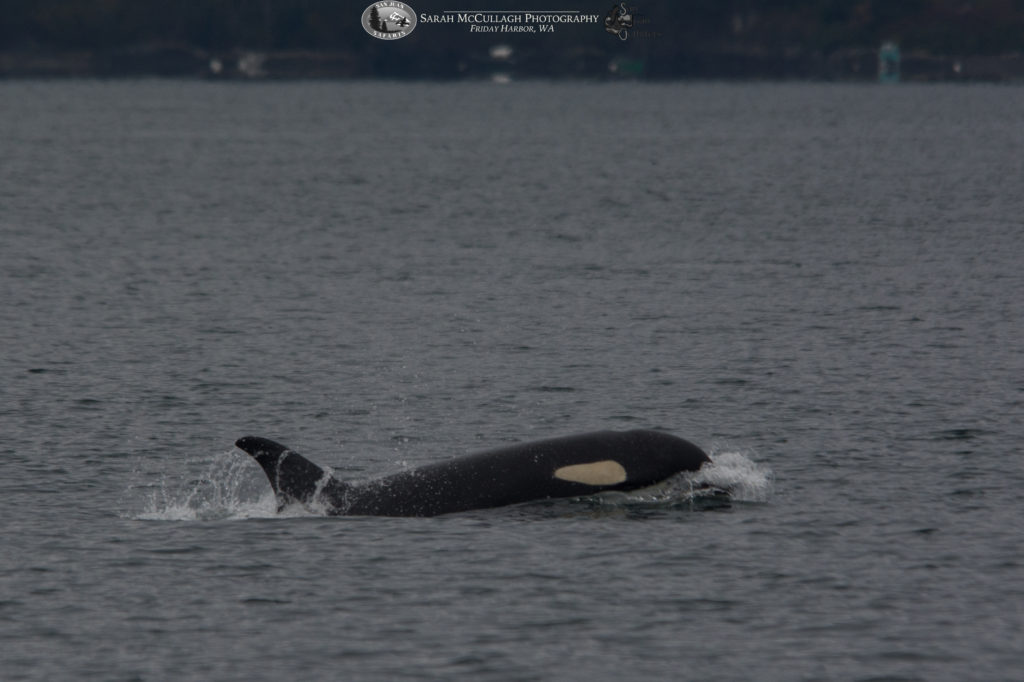 « Lone Orca in Late October!
The T101’s: Mama orca and her boys explore the Salish Sea »