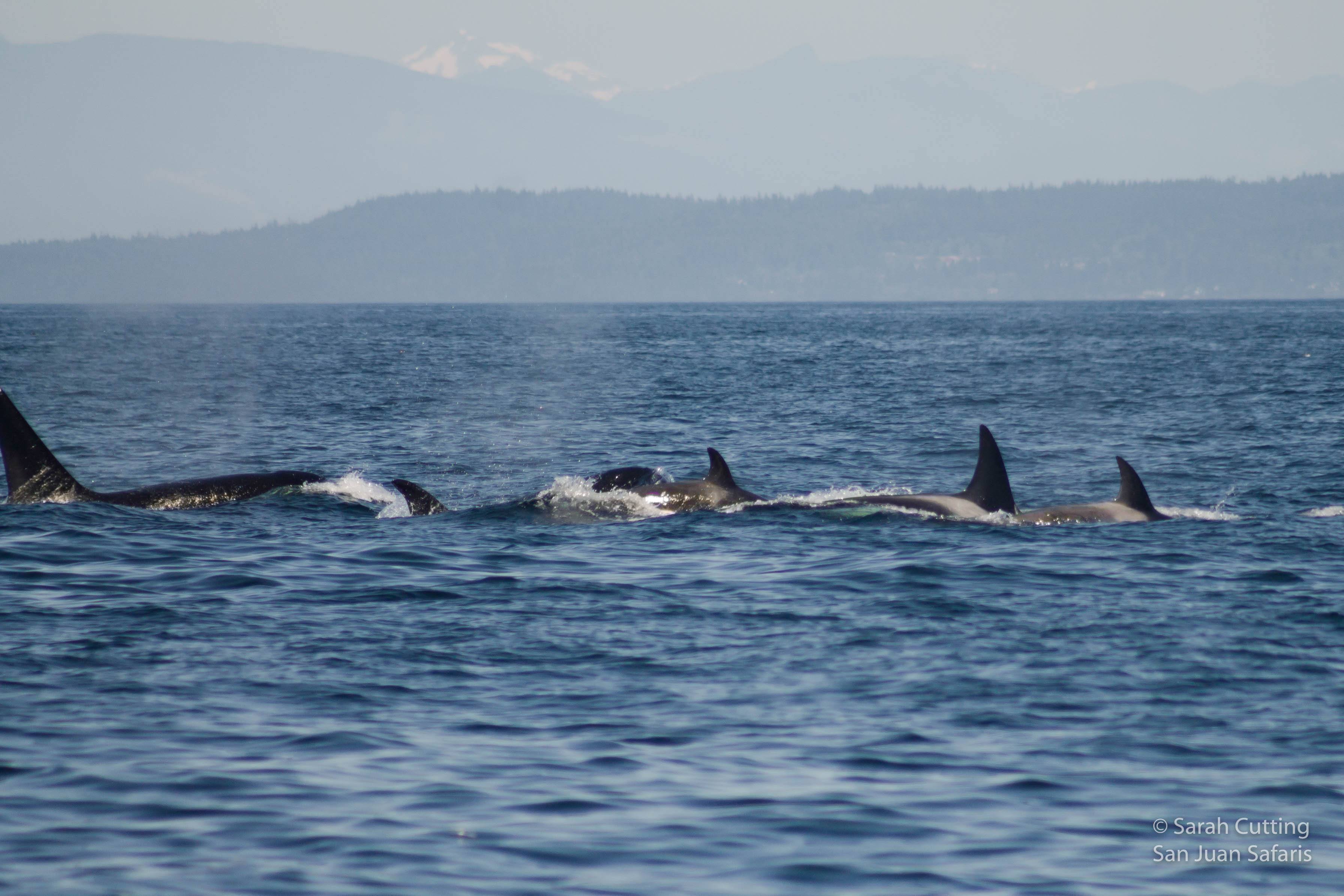 Transient killer whales galore in the Salish Sea! To continue our trend of a marvelous season of transient orcas, we left Friday Harbor today with multiple reports of killer whales a few miles south of San Juan Island. Like most trips, we don’t have a guarantee of whale sightings until we actually have eyes on animals (finicky whales!), but multiple reports within our range and getting closer sure does give us a good chance. Luckily, all of our reports today were to the south, so making the daily decision of South-or-North was pretty easy!

We made our way down San Juan Channel, past Cattle Point Lighthouse, and into the Strait of Juan de Fuca. The Olympic Mountains stretched out before us, Mount Baker peaking out to our east, and the hazy outline of Mount Ranier becoming clearer and clearer the further south we went. Before long we were spotting blows and tall black dorsals on the horizon. Orca whales were nearby!

We arrived on scene to find a quaint family of four orcas (the T77’s), made up of mom and her three kids, including almost-grown-up-male T77B. We observed them as they moved slowly but surely northwards, before they made a sudden turn to the east. They started booking it, like 15 mph surface travel booking it, and after a longer dive, we were greeted by 6 whales! Two orcas had suddenly appeared, seemingly from nowhere. They were soon identified as two members of the T37A family group, meaning that the other three members of that family of transient killer whales were probably hunting just a few miles out of sight. Orcas can hear within 10 miles of themselves, so these two individuals were probably still under the watchful eye (or, rather, ear) of their mamma nearby.

We followed these now six whale strong group of orcas as they moved steadily towards Whidbey Island. Another deep dive was punctuated by an unexpected tail slap off our stern, followed by the rest of the group turning, yet again, in a completely new direction. These whales were making huge circles around the area! We followed the group as they headed west this time before leaving them to their sporadic and ever-changing route.

Check out the gallery below showcasing these beautiful transient killer whales! I also threw a common murre in there for all you bird lovers out there.

To end our trip, we visited the nearby Whale Rocks to observe harbor seals as they hauled out on the rocky shores or hunted in the massive bull kelp forests for fish. We completed the last leg of our journey back to Friday Harbor with sunny skies and a cool breeze off the water before returning back to the dock to enjoy the rest of our afternoon.