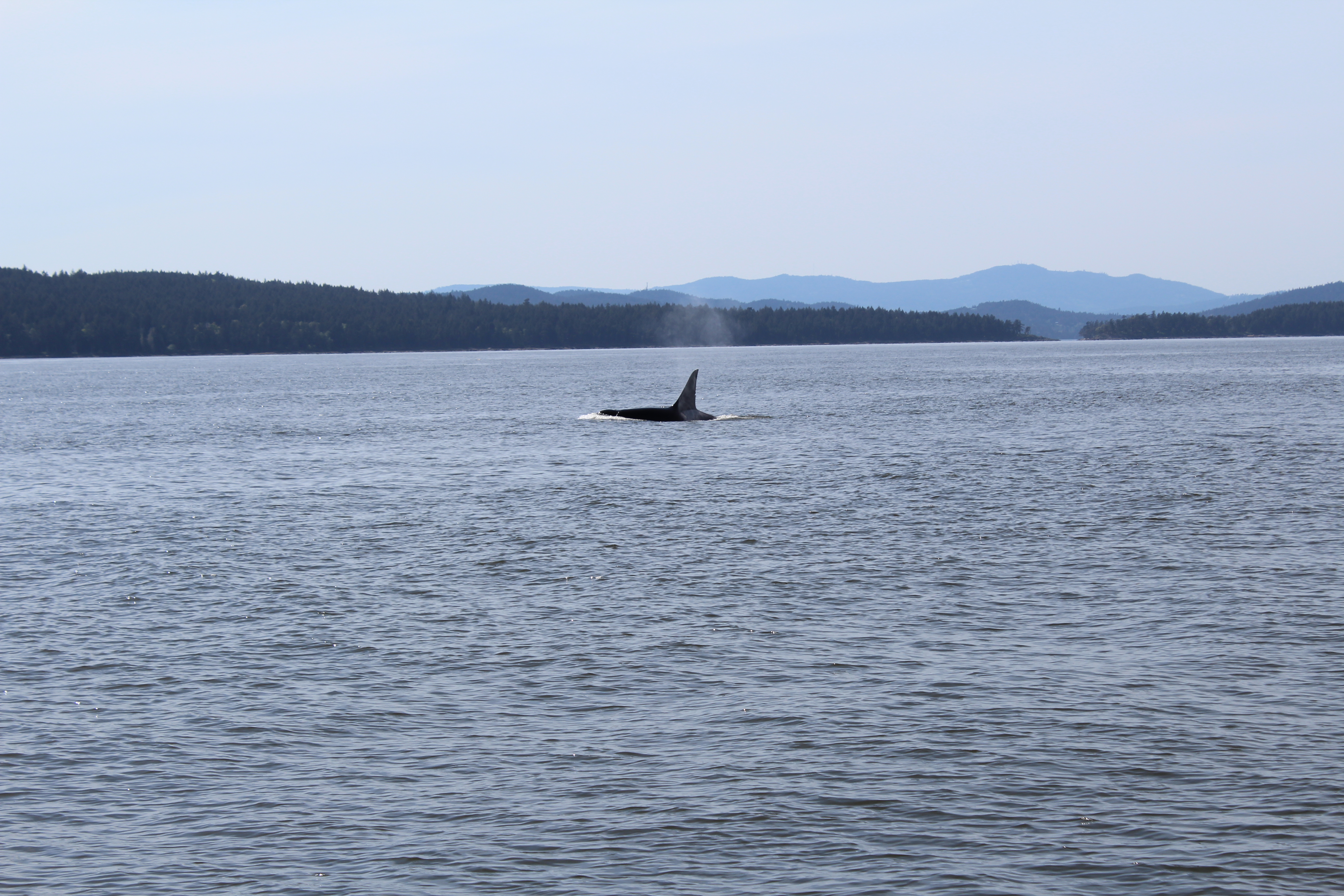 On Tuesday, April 19, we were lucky enough to get another sunny day in April. The past few days were full with whales and I was wondering what new surprises were in store for us today. Captain Mike and I headed north with our wonderful crew in search of Transient Orcas. In all the world there are 10 (maybe 11) ‘ecotypes’ of orca. These ecotypes are the same species but as far as we know their social, vocalization, and dietary differences keep them genetically distinct from each other. The Transient ecotype (also known as Bigg’s) travel in small family groups that tend to be more fluid than the more famous Southern Resident Orcas and their pods. These Transients also only feed on marine mammals, with 70% of their diet consisting of Harbor Seals.

We headed north to look at all the great Seal and Sea Lion spots, because you usually expect the predator to be where the food is, right? We went to rock after small island and had a great time watching the playful seal pups at some places and the gigantic Steller’s Sea Lions wrestle at other. Both of these animals are food sources for the Transients, but so far no luck yet. The Transient orcas are a little harder to spot since they, stay under longer and tend to zig-zag under the surface. This is due to their unique hunting style. While other orca ecotypes rely mostly on their echolocation abilities to find their prey, these mammal eaters are silent hunters. Everything they do is about stealth since they are hunting other intelligent mammals. So while under water they are visually scanning, looking everywhere for their food, and when they surface they make as little noise as possible. 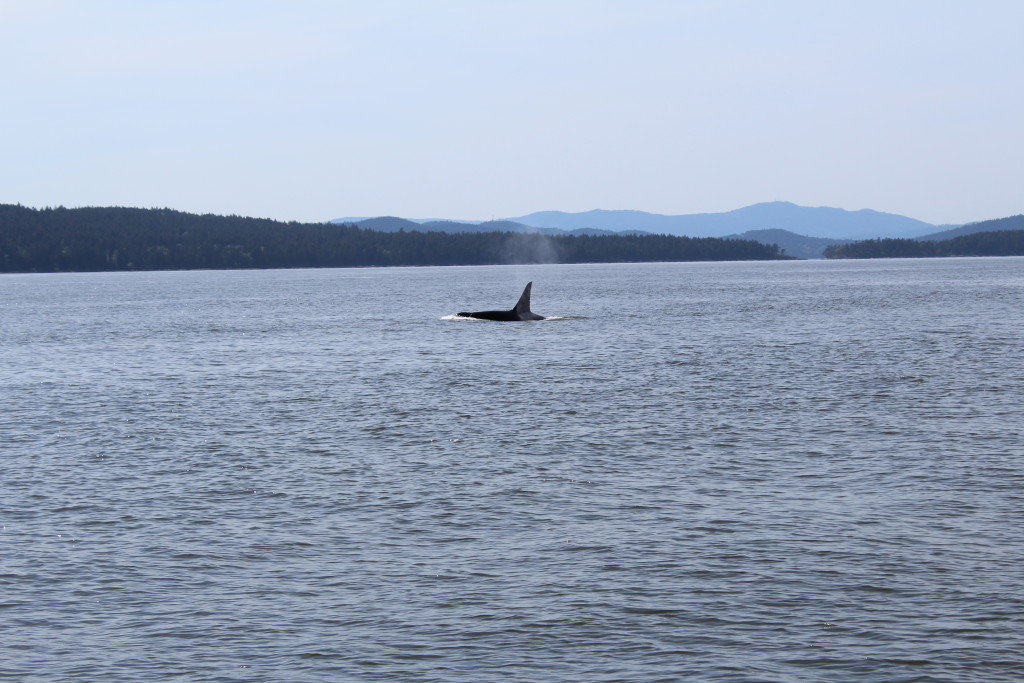 We were about to lose hope on our hunt when a male Transient Orca was spotted! We soon were with this huge, adult male, that seemed to be traveling and hunting alone. This is very interesting since orcas asre social animals and almost always travel in groups, but adult males, especially if their mothers are no longer around, do sometimes strike out on their own and sometimes join with other families for a while or pair up with other lone males. This, though, was the first time I had ever seen an orca alone. We identified him as Transient orca T049C. He usually is traveling with his family, the T49B’s, and I saw him with them a few weeks ago, but today I guess he wanted some alone time.

We got some amazing views of this guy gliding through the water in search of his prey. He fooled us a few times by diving on one side and surfacing on the other, and to top it all off he swam between us and Mt. Baker, big and snow-capped, in the background. What another San Juanderful day. Whale folks, until next time. 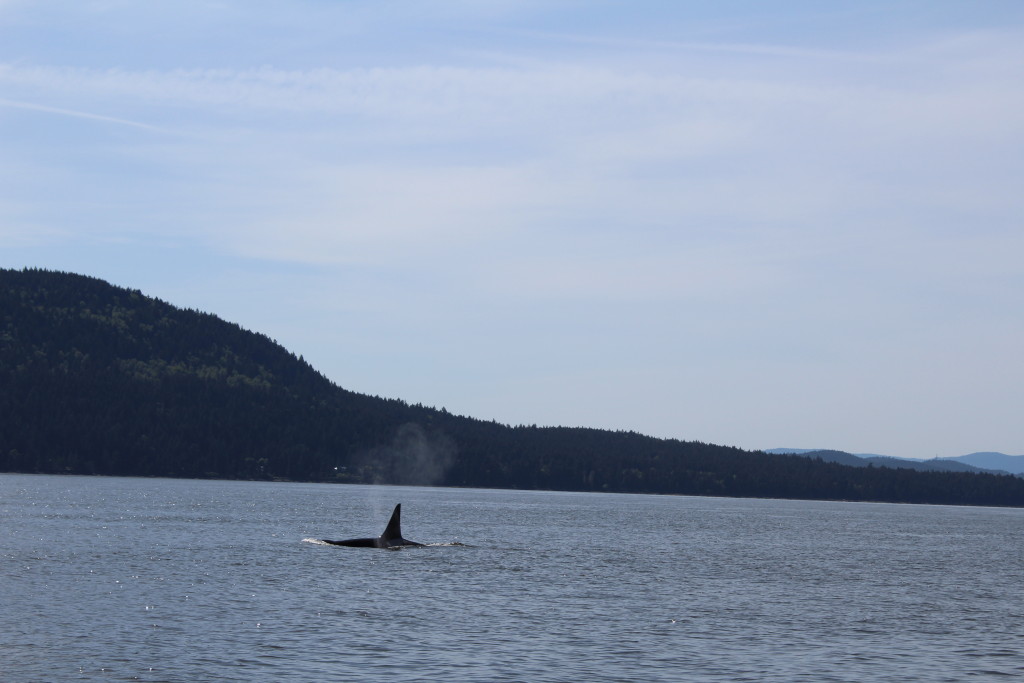