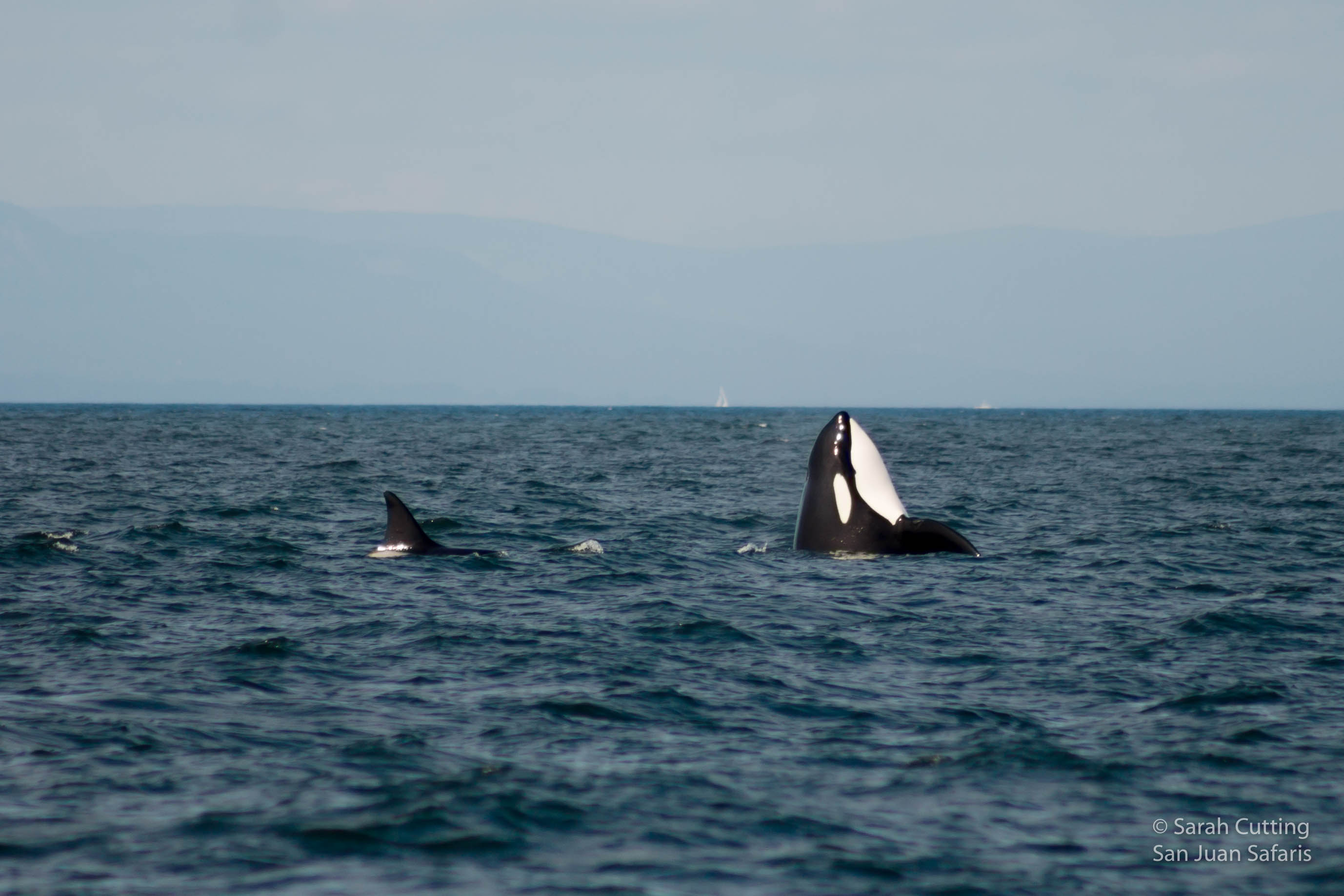 As one of our passengers on M/V Kestrel put it, what a truly epic day on the water today! We left Friday Harbor on our 2pm departure in the hopes of finding some whales that had been tentatively reported just east of us in Rosario Strait, one of the major straits in the San Juan Islands that cuts in between Anacortes and Cypress Island and the rests of the San Juans. What we didn’t expect, though, was an entire parade of transients scooting south down the entire strait!

As we pulled out of Obstruction Pass, we radioed in to the other captains in the area for an update on the reported orcas. The original reported group, the T100’s, had already moved south down to Blakely. Lucky for us, two new groups had already been picked up just north of our position. We angled up to Pea Pod Rocks and encountered a family of 5 transient orcas, the T46’s. We followed alongside them as they quickly moved south, almost as though they were trying to catch up the the T100’s a few miles away. Orcas have a hearing radius of 10 miles, so even at what seemed like a great distance to us, these two groups could still be communicating with each other!

We left the T46’s to move to the farthest north group, and were astounded at the sheer number of whales that we encountered near Sucia Island. A dozen or so whales were split into a few fluid groups, hunting together with big splashes and circling behavior, porpoising (super fast surfacing that throw off their own wake) after, ironically, porpoises, and traveling in a huge group, socializing and playing along the way.

We identified this huge group as four different families – the T34’s, T36’s, T37’s, and T137’s. T137A’s 6-foot tall dorsal loomed over the shorter, curvier dorsals of all the females and calves in the group, and the younger individuals had a ball as they rolled over, breached, spyhopped, and tail-lobbed amongst the huge group of whales. The highlight of the trip, however, was when T37A2 and another member of her family swam right up to our stopped vessel, approaching us on the left, moving right to our bow, and then swimming along our starboard side a mere 3 feet from our vessel! Encounters like that are rare, and so cherished even for us crew members that see whales nearly every day. The sound of their breath, the glowing of their white markings under the bright green water, the amazement at their size – it’s the stuff of dreams.

All in all, we spotted 15 killer whales today. That’s an amazing number of whales for one whale watch! We got to spend the majority of our time on the water witnessing playful orca behaviors, with some exciting hunts thrown into the mix as well. Again, it truly was an epic day.