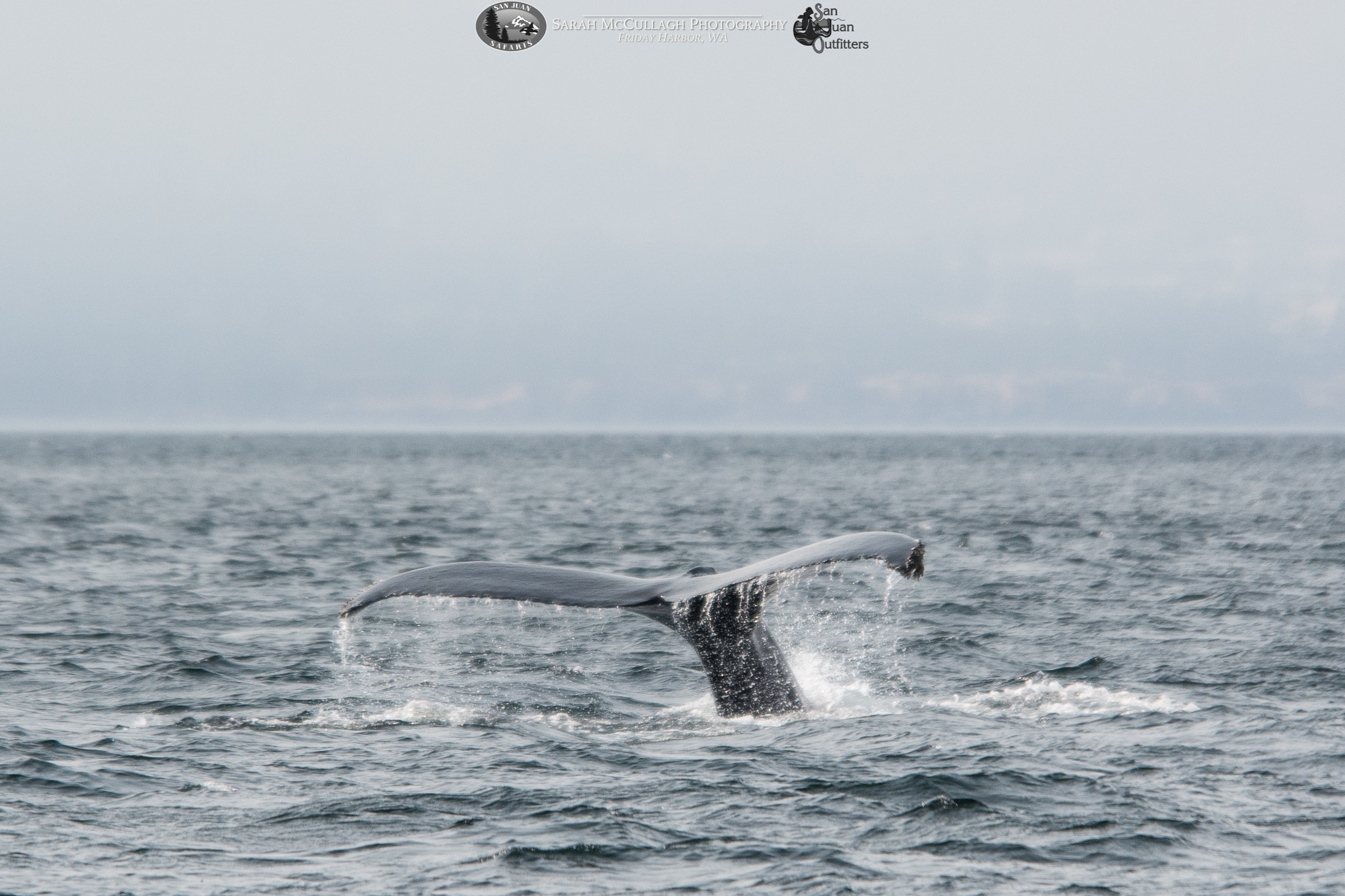 It’s the beginning of a scorching hot week on the mainland today, with temperatures set to rise above 90 degrees. Yikes! Over here in the San Juans, however, we’re enjoying a typical late-summer heat of 75, with sunny blue skies and flat calm waters to boot. Add in a few whales, and you’re set for a perfect day on the water.

We left Friday Harbor today with a report of a humpback whale feeding off of Eastern Bank. Banks, similar to an underwater plateau, are prime feeding grounds for any animal that’s fond of schooling fish (think baleen whales, seabirds, salmon, porpoises, and seals).

When we arrived at the western side of Eastern Bank, our humpback was perusing the waters for food, surfacing erratically and changing direction fast. We stopped our boat a few hundred yards from it’s last fluke out dive, waiting for it to resurface. What we didn’t expect, though, was for this massive, 50-foot-long animal to pop up right off our bow! With a powerful exhalation, this beast surprised us all and started moving towards our port side. In one surreal moment you could even see the its entire 15-foot-spread of its fluke underwater, the scarred spinal ridge and fluke edges glowing green under the phytoplankon-infested waters. It was amazing, to say the least.

As it moved away from us we witnessed a beautiful fluke-out dive, showing off a scarred all-black fluke, only seen once before in this area – meaning this was a new whale for us! We watched it surface a few more times, a little farther off this time, and noticed that it had a deep gash behind its dorsal, likely from a past entanglement with fishing gear. Humans like to fish in the same places that whales like to feed, because both rely on the same conditions to be successful. This, combined with a humpback’s sheer size and low maneuverability, makes them especially prone to entanglements and vessel strikes.

Many disentanglement organizations work to free whales just like ours, so that they can go about living their whale lives with little more than a scar to show for it. This particular humpback appeared to have a worse go at it than others, just judging by the depth of its scar. Luckily, it’s all healed up now, but us whale watchers would love to see better fishing practices put into place to protect any future humpbacks from looking like this poor guy!

We were on our way back to Friday Harbor and approaching the eastern side of Salmon Bank (another underwater plateau!) when we encountered a second surprise whale – a Minke. These 30-foot baleen whales are year-round residents here, but are rarely seen because of their quick and subtle surface activities. Lucky us to get two amazing looks at it without even trying.

Our final stop on our way home was Whale Rocks, which is now heavily used by migrating Steller’s sea lions. These monsters can get up to 12 feet long and 2500 pounds, and have a knack for competition. Growling and fighting are common pastimes for adult male Steller’s sea lions, and we definitely got a taste for that on our way back! One adult male even forced another one right off the island, where it skulked away underwater to try again another time.